Sin City is home to a lot of restaurants and bars, but there are tons of hidden gems that the majority of Las Vegans aren't unearthing. To help guide us to these potential discoveries, we've enlisted some of our city's many food players to share their recommendations for a weekly feature dubbed Dining Confidential. 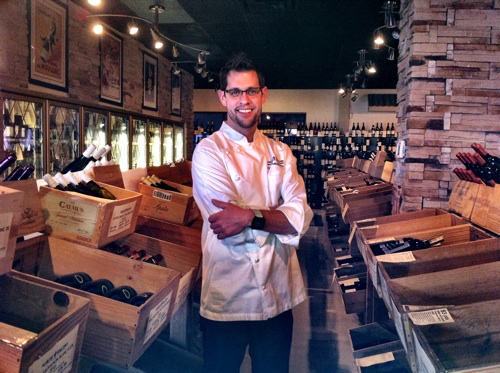 David Middleton just joined Marché Bacchus French Bistro & Wine Shop in October after working as the executive sous chef at Scarpetta at the Cosmopolitan of Las Vegas and chef d’Tourant at the former Alex at Wynn Las Vegas. Heading up a kitchen sure hasn’t left him with much time on his hands as he works 16-hour days to keep the menu fresh at this Summerlin favorite. Middleton maintains his humble demeanor despite his rise to fame. After all, he did get his start as a dishwasher at a Wisconsin restaurant called The Jug Store known for its Friday night fish fries. He even worked as a sous chef at David Burke formerly at the Venetian. Still, like most chefs, he likes to venture out to let someone else do the cooking.

“Most of the late-night places in Vegas serve Asian cuisine. Raku is one of my favorites, but tends to be a little on the pricey side. I absolutely love the Kobe beef tendon, the Karobuta pork cheek and the Agedashi tofu, which is a deep-fried tofu served in a broth with salmon roe, nameko mushrooms and chile paste. The tofu is housemade, too. Every time I dine at Raku, I always get those three dishes. The chicken roll, also known as juicy deep fried chicken, is basically a chicken thigh that they debone and then they wrap it up in its own skin, roll it in a log and slice it on a bed of spinach. It’s the most flavorful piece of chicken you can get anywhere. I also like Naked-Fish’s Sushi & Grill on Durango between Flamingo and Twain and Angelina’s Pizza is awesome.”

· All Coverage of Marché Bacchus [~ELV~]