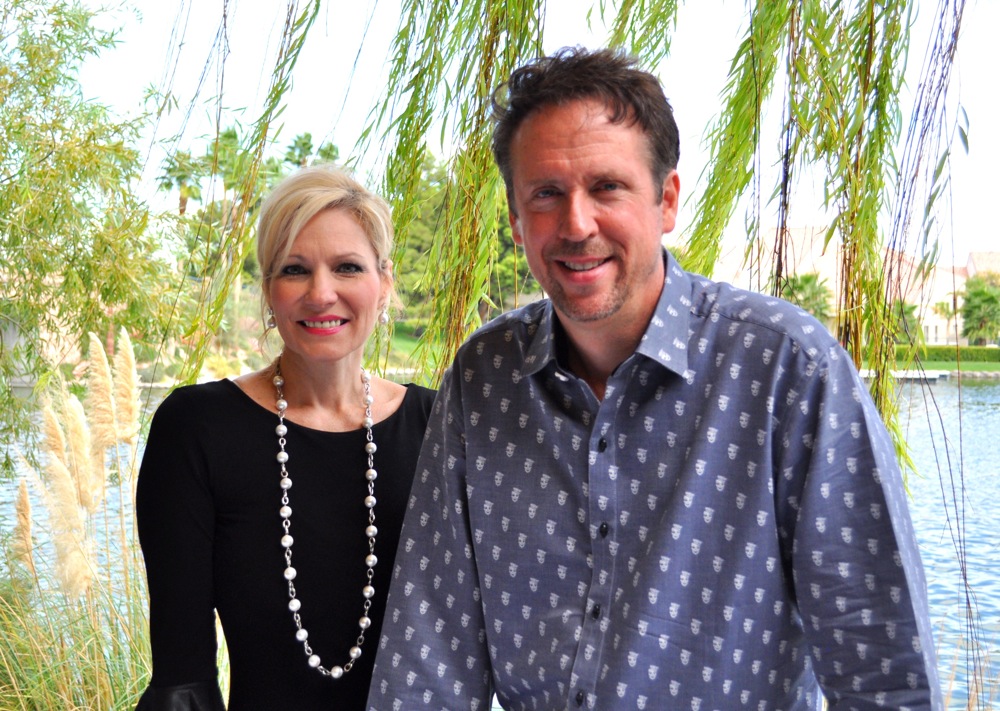 Five years ago, New Orleans natives Jeff and Rhonda Wyatt took over Marche Bacchus French Bistro & Wine Shop on Lake Jacqueline from Gregoire and Agathe Verge, the French couple who originally opened the restaurant in 2000. Now the Wyatts have found a chef, David Middleton, who executes their vision of a top foodie destination with Alex Stratta on board as a consulting chef. Here they talk about running an off-Strip restaurant that has become a staple in the Las Vegas food scene.

Rhonda Wyatt: Since most of our dining is lakeside, April and May and September and October. Nobody wants to sit inside right now. We don't need misters or heaters. It's nice to have those things all year round.

Plus we don't have mosquitos.
RW: People don't realize when you come from the a land of mosquitos what a big deal it is. My mother was a Katrina transplant, and she could never could leave the door open.

As one of the hottest restaurants in Las Vegas, you've surely been offered gifts or cash in exchange for reservations or a table. What have people tried?
JW: You know we really haven't had anyone try anything.

RW: I would say people try to ask to speak to talk to Jeff and Rhonda. I always say we'll make the impossible happen.

RW: We've had people so appreciate what we've done that they brought us gifts from Brazil. We helped with Valentine's Day. People might bring a great bottle of wine they think Jeff hasn't tried.

RW: I always say no is not in our vocabulary.

JW: If people are lingering and we need a table, I might offer them Champagne to move to the bar area.

RW: Bastille Day is our busiest time. We fit more people out there with 275 all at once. That's bringing everybody in, renting smaller tables. That's the vibe of the day though.

Tell us about your favorite customers.
JW: It's kind of funny. These are customers texting me (he says as he shows his phone). We made them friends through the restaurant. We have 40 of these customers we didn't know before we opened the restaurant who traveled with us to New Orleans for a birthday.

RW: We're here all the time so this our social life. We don't have much of a life outside the restaurant.

I look at people and think, "This person has the potential to turn into a new friend. We already share something in common with them."

JW: I traveled with one to China. I just got back from Italy with four I met here.

RW: The one's that come all the time we've gotten to know really well.

How about celebrities?
JW: [Hypnotist at Paris Las Vegas] Anthony Cools, who happens to be a friend of ours. We do things with him. Debbie Gibson. This is her favorite table (referring to the back booth in the corner of the restaurant). Her boyfriend has a practice here.

RW: Robin Leach comes here all the time. Chris [Phillips] from Zowie Bowie. I think people like this place. It's easy for them to hide. They all have their favorite tables and we always accommodate.

JW: If they're coming here, they're not looking for the scene.

How do you deal with VIPs when there are no tables to give?
JW: We make it happen. That's a certainty. I'll knock someone in the water if I have to. There are always ways to get things done.

So, what's the strangest request that you've accommodated at Marche Bacchus?
RW: We do a lot of proposals we had two recent requests. One brought in a plate that said, "Will you marry me?" on it. He wanted us to cover the plate with food and eat until she saw the dish. We had to coordinate the magic plate. He was so nervous watching her eat.

We had another who wanted us to drop rose petals over the bridge to take a long path to the far table by the fireplace.

JW: I've gotten stranger requests, but I'll keep them to myself. The rest of them are not printable.

What was the first thing that shocked you in Las Vegas?
JW: We're from New Orleans. Nothing shocks us.

RW: If you think about where we're from, we moved from one Sin City to the next.

Do you ever get any requests for vegetarian dishes here at Marche Bacchus? How do you accommodate them?
RW: All the time. We have a vegetarian menu and a gluten-free menu.

We had a group of people who wanted vegan, no dairy, no oil and wanted a five-course tasting. The dessert was the hard part. I think we did berries with a sauce that fit the bill.

JW: If they think of something they like, we'll prepare it for them if we have it here.

What's the most popular dish right now?
JW: Probably the torchon of foie gras. Practically no one has it now. The style is really fantastic. It has a jalapeño strawberry gelee and toast points cooked in duck fat with pistachio on top. John Curtas called it, "The ultimate PB&J."

RW: Fall is upon us, so we'll have a cassoulet for the winter.

JW: That's a dish that gets ordered regularly. We've had a lot a people say it's probably the single best duck dish they ever had.

So, when you're not at Marche Bacchus, where are you eating these days?
RW: Le Cirque. We love Gregory [Pugin]'s food. We sit at the bar there. It's a relaxed setting.

JW: Blue Ribbon Sushi. We love the King crab truffled fried rice and the Hachi with a ponzu chiles.

RW: We just started taking Sundays off, so one of our main things we do brunch at Bouchon.

JW: You can see us there all the time, staying all the way to dinner. One time Thomas Keller came up and said, "I have to see the people who stay here all day long."

What's the must-order dish at Marche Bacchus?
JW: I think duck was the No. 1 dish.

RW: The salmon and filet mignon. Almost certainly. For an appetizer, the heirloom tomato salad, the escargot, the French onion soup and the steak tartare.

JW: The seared sea scallop and the duck tied.

Were there any reviews that led to significant bump in service, or a change to the type of clientele?
RW: I think being named in the top 50 restaurants in the first two issues of Eating Las Vegas helped. I don't now how, but anytime anything is in in the Review-Journal, we see more business. We were the featured restaurant in Diamond Cake and the Weekly within six weeks. Then we were in the Taste section on Sept. 19. It was about outdoor dining. They featured three photographs. That generated more than the other magazines all put together. I cut it out and put it at the counter. I never had so many people say, "That's the article I read." They used nice big color pictures.

At the end of the day, what's the one Gatekeeper tool you need to get the job done?
RW: Ultimate passion in what you do because if you're passionate with what you're doing, it carries you through to solve any problem.