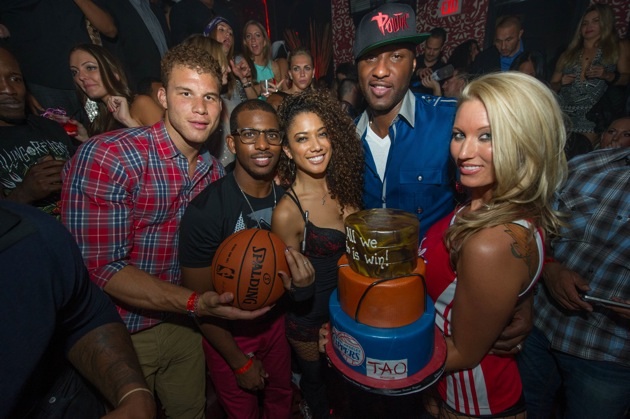 Actor Russell Brand and Dancing with the Stars diva Julianne Hough were spotted with a group of friends at Simon Restaurant & Lounge at Palms Place on Sunday night. The group ordered dishes such as the Junk Food Platter. [EaterWire]

Scottish DJ Calvin Harris dined at Gordon Ramsay Steak at Paris Las Vegas with his girlfriend on Sunday. The couple ordered a cosmopolitan and a Macallan 18-year old single-malt scotch whisky with the American Kobe beef sliders appetizer. They followed the sliders with A5 Kobe, new to the menu, and the duet of lamb along with fingerling potatoes, fire-roasted corn and asparagus. For dessert they ordered the steakhouse's famous sticky toffee pudding, tropical panna cotta and cheesecake. [EaterWire]

Albie and Chris Manzo from The Real Housewives of New Jersey dined at Lavo at the Palazzo on Saturday night. [EaterWire]

Chris Paul and his teammates from the Los Angeles Clippers tipped off the pre-season in Las Vegas on Friday night at Tao Asian Bistro at the Venetian. Lamar Odom, Grant Hill, Chauncey Billups, Matt Barnes and Blake Griffin all started dinner with a champagne toast. The players dined on a special Clippers sushi roll added to the menu for the night in honor of the team, as well as a special Lob City Typhoon Lobster dish and miso-glazed Chilean sea bass. [EaterWire]

Singer and actor Justin Timberlake and five friends were spotted at Old Homestead Steakhouse at Caesars Palace on Monday after his Shriners Hospitals for Children Open. Timberlake ordered a bottle of Tignanello from Italy to accompany his oysters, Kobe meatball and 16-ounce signature bone-in filet. His group lounged in the restaurant for more than three hours. Comedian George Lopez dined at there on Sept. 30 with his fiancé and two business colleagues. Lopez's group started with a bottle of Dom Pérignon and the seafood platter. Lopez ordered the signature bone-in filet. [EaterWire]
· All Coverage of Star Watch [~ELV~]