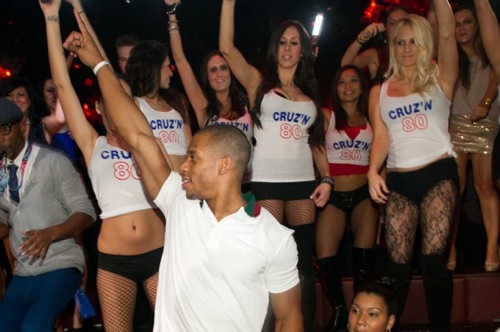 On Saturday night, One Tree Hill star Stephen Colletti celebrated his birthday with his girlfriend and co-star Chelsea Kane with dinner at Stack Restaurant & Bar at the Mirage. [EaterWire]

On Saturday night, New York Giants wide receiver Victor Cruz dined at Tao Asian Bistro at the Venetian with his girlfriend and a group of friends. They ordered sushi, tempura and Kobe rib eye. Actor Miles Teller from Footloose also dined at Tao, ordering sea bass and crispy rice. Redfoo and the Party Rock crew dined at Tao Monday night. Actress Nadine Velazquez from The League also dined at Tao with her boyfriend, who was celebrating his birthday.  [EaterWire]

Denver Broncos quarterback Tim Tebow dined with most of his offensive line at 35 Steaks + Martinis at the Hard Rock Hotel on Wednesday night. On Tuesday, Tebow dined with a party of 15 at STK at the Cosmopolitan of Las Vegas on Tuesday. [LVRJ]

Musician Alice Cooper dined at Spago at the Forum Shops at Caesars Palace on Friday afternoon with a friend. Cooper ordered the spaghettini. Entertainment icon Dick Clark dined at Spago on Thursday afternoon. He was with a party of four and had the ravioli. [EaterWire]

Niecy Nash from Dancing with the Stars dined at Lavo at the Palazzo Saturday night. Poker pros Phil Ivey and Antonio “The Magician” Esfandiari dined in separate groups at Lavo in the Palazzo Wednesday night. [EaterWire/LVW]

On Monday night, drummer Travis Barker from Blink-182 dined at Nove Italiano at the Palms. He ordered the panzanella salad and rigatoni primavera. [EaterWire]

Redfoo of LMFAO dined at Holsteins at the Cosmopolitan of Las Vegas Monday with three other people. They ordered steak fries, carbonara chicken, sweet potato fries and the classic burger and Koran Bullgogi burger. [EaterWire]
· All Coverage of Star Watch [~ELV~]