Timothy Henderson Digs Sushi on His Days Off

Share All sharing options for: Timothy Henderson Digs Sushi on His Days Off 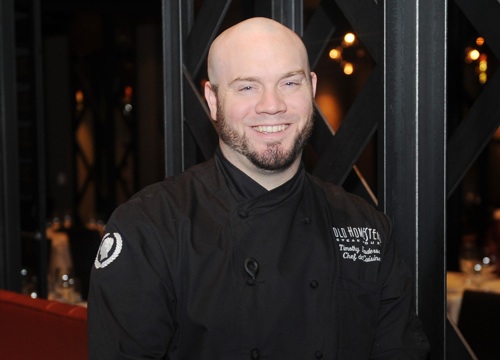 Timothy James Henderson has been busy behind the grill since Old Homestead Steakhouse opened at Caesars Palace right before Christmas. The first outpost of Old Homestead on the West Coast brings Annabelle the Cow from her home in the Meatpacking District to the Strip.

Henderson’s route to Vegas started in Reno, where he was born, then on to the California Culinary Academy in San Francisco. Then he started his tutelage under some of the great chefs, such as Michael Mina, Andrew Budnjy, Larry Forgione, Mark Lorusso and Stephen Hopcraft, where he quickly learned and developed his own style of cooking.

Before Henderson became the executive chef of Old Homestead Steakhouse, he perfected his skills at Pisces in Burlingame, Calif.; Arcadia in San Jose, Calif.; and most recently at Tableau and STK here in Las Vegas. He especially enjoys cooking steak and seafood, although he is a lover of all food, as you can see by the types of restaurants he frequents when he’s not working. He shares his favorite places to dine in Las Vegas.

“I enjoy eating sashimi on my days off. My two favorite things to eat are uni (sea urchin) and aji (Spanish mackerel). There are many places across town that I love to eat sashimi at but I usually end up at Sumo Sushi 2 because it’s across the street from my house.”

“I also enjoy dining at Naked Fish and Goyemon (if I can get in). I love unfiltered chilled sake and Japanese beer along with my fish. I am a very simple eater and lover of all food, but the perfect dinner to me is fish, beer and sake with my wife.”