Share All sharing options for: Alex Taylor, Carlos Buscaglia Talk About the First Year at Due Forni Pizza & Wine Bar

Welcome to One Year In, a feature in which Eater sits down for a chat with the chefs and owners of restaurants celebrating their one-year anniversary. 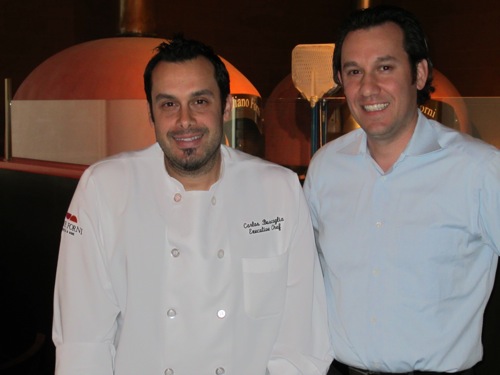 A career managing restaurants and then food and beverage operations at Mandalay Bay, MGM Grand and Wynn Las Vegas on the Strip gave Alex Taylor a hankering to finally put his own stamp on a restaurant. Last year, he teamed up with Carlos Buscaglia, who he met when he was the general manager of Fiamma Trattoria & Bar at the MGM Grand and Buscaglia was the chef, to open Due Forni Pizza & Wine in Summerlin. They thought about the concept on good nights. They thought about it on bad nights. Then Taylor made the move to branch out on his own and convinced Buscaglia that it was the right decision. Eater Vegas caught up with Taylor and Buscaglia to chat about their first year in the business as owners, lessons learned and the current state of Due Forni.

How did Due Forni come together?
AT: Carlos and I had always worked on a pizza concept since we were together at Fiamma. We would sit in the office and talk about opening a pizza place. Very early on we came up with the beverage part. We liked great wine and no one was doing it anywhere at the time. That was always part of the concept. Eventually the concept changed to a Neapolitan pizzeria. We wanted the settings to be elevated but still approachable. Linen napkins. Wine glasses that are nice. A pizza platter that’s a hand-thrown piece of pottery made in California.

The most impactful change to the concept came during an interaction with Steve Wynn. He went on and on about how he hated Neapolitan pizza. I realized that he didn’t know what Neapolitan pizza was. We decided to get a second oven [for the cracker-thin Roman crust] and Carlos jumped on it. We can do so much stuff in there — roast the pastas and the appetizers at 500 to 900 degrees. The name of the restaurant means two ovens. It was a six-year odyssey. It took me nine months to leave the Strip. I finally convinced him and here he is.

Why leave the cozy confines of the Strip to open a restaurant in the city?
AT: I’ve always been an entrepreneur. I always worked in an entrepreneurial environment. MGM changed all the food and beverage when I was there. Mandalay Bay changed everything. Wynn in particular at the time was a very entrepreneurial company. They hire good people and tell you to do your own thing. When the lights went out in 2008 and we weren’t going to do the Back Yard [the golf course], I left because I could not see myself continuing as a senior executive on the Strip.

When we were on the Strip, there was so much passion for doing incredible things. Unfortunately, the reality of the economy now is the cold-hard facts of the numbers.

CB: I wanted to create something that was my own. I was always working with someone else. Their name, their menu. Now I can say this is Alex and my idea. It was a huge challenge at the beginning when Alex told me that this was two ovens. We purchased a mini oven to start practicing in my back yard. How can I do this dish that I did at Fiamma in the oven? We did everything — lamb rack, wild salmon, Branzino, filet mignon all done in the oven.

How has it been different in Summerlin than the Strip?
AT: You see the same people all the time. We have one customer who comes in once a day and if he misses a day, he comes in twice a day. I see more executives here than I did on the Strip.
Then the people that I’ve met that I never got to interact with before. To see them regularly is so rewarding. The connection is that much more important.
CB: I get to know when a customer comes in what he wants on his pizza. When you’re doing 1,200 covers a night you don’t have time to read the name on the ticket. It’s just a different vibe.

What did you learn?
CB: On my side, this is my first time building something from the ground up. At Fiamma, it was kind of my job. This used to be a clothing store. We were involved in every single step of building a restaurant.
AT: I had to move quickly. Before you would want to move quickly but couldn’t move quickly. It takes time to get back in shape. If we find out something isn’t working on the menu, and instead of going through all the red tape, we could change it. I would say, “Is there a reason we haven’t fixed this? Why don’t we fix it now?”
CB: We don’t need a chain of 30 emails to do a menu change.

What were you thinking about in terms of design?
AT: When I was building Encore I decided this. I think people are over three-star dining. I’m not over the quality of the ingredients, but over the multiple markings, the linen table clothes, the six-piece table markings. Even being in the business I feel uptight. We wanted the quality of ingredients and the quality of execution. The ingredients that Carlos uses are not a better than Robuchon. What we use is the top of the line with zero compromise.
CB: People say, “Oh, pizza, you must have great food costs. Oh you must be making a killing at $19.” Good ingredients cost money.
AT: The design reflects the quality that we have plus the comfort. We want to put everyone at ease. We put a lot of effort into the sound. There are subwoofers in here. There is a low-end subwoofer that adds texture to the room. The sound waves warm you. One of the things that John [Curtas] said when it opened: “The design is urban chic that will appeal to the hipsters and stroller pushers alike.” I’m both.

What was the menu testing process like?
CB: We spent six months on the menu, in the backyard at my house twice a week. One day was strictly pizzas. Then we always invited a different guests. Then other times we did appetizers. Another day was just salads. I think it took me 70 styes of recipes for the dough I did to do the Roman and the Neapolitan.
AT: And that was after he did a tour of the East Coast — Virginia, Philly, D.C.

Has the neighborhood embraced the restaurant?
AT: Absolutely. We think we have a very wide appeal. Some people don’t like buffalo milk mozzarella. We have apostles of Due Forni that go out and grab people and bring them to us. It’s almost to the point where they refuse to bring people twice. They’ve been great. They’re not only coming from Summerlin but Henderson and Centennial.

Six months in, what changed?
AT: We reorganized the wine list at six days. Originally there was a list of wine. White, reds, done. You would look down the list and see $30 a glass. Interesting because people said oh, a lot more lower priced wines. Everything that we have by the glass we also have by the bottle at four times the price. We use a 6-ounce pour. We really wanted to push selling glasses. We added the bottle price to give a perception of value. We were all about adding that formatting that changed the perception and fixed the issues we had. We never been a thought about changing the ingredients.
CB: As soon as everyone was trained we added more appetizers, two pizzas. Then we focused on running specials. Every day we run at least one special.

Does it seem like it's been a year?
AT: Not at all.

What's the must order dish of the moment?
AT: The Due Forni Neapolitan pizza, the margherita pizza, of course. The octopus, gnocchi and carpaccio. The roasted items everyone gets excited about now. Lamb, Branzino.
CB: They know they don’t have to come in and have a pizza. We’re not just a pizzeria now.

What's on tap for the future?
AT: We’re definitely expanding. We’ve always been working on a casino location, but they move slow. We continue to push for that. We’re not going to wait for that to happen. No Henderson or Town Square location is on tap. We’re looking at out of state for other opportunities. There is a nonstop flight to that town. This concept has incredible legs right now.

For more One Year In posts published today across the Eater Universe, head over to Eater National.
· All Coverage of Due Forni [~ELV~]