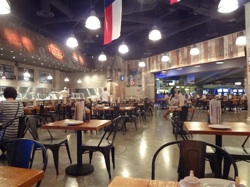 John Curtas not only didn’t like the barbecue at Lynyrd Skynyrd BBQ & Beer, but takes a stab at two local critics who both gave it good reviews. “Think of it as a barbecue joint tacked onto a t-shirt shop and you’ll get the idea. Take a taste of the food and you’ll get the idea too.” Curtas goes on to blast Max Jacobson from Vegas Seven and Brock Radke from Las Vegas Weekly. “Jacobson and Brock both bloviated about how they’ve “imported the style and recipes of the legendary Kreuz Market,” in Lockhart, TX — taking their cues on this ‘cue straight from the press releases — and how “spectacular” the meats are?which only signals to us either 1) their laziness; or, 2) their cluelessness about ‘cue. Or probably both.” [ELV]