Share All sharing options for: Rob Moore Finishes Every Bite of Grimaldi's Pizza

Sin City is home to a lot of restaurants and bars, but there are tons of hidden gems that the majority of Las Vegans aren't unearthing. To help guide us to these potential discoveries, we've enlisted some of our city's many food players to share their recommendations for a weekly feature dubbed Dining Confidential. 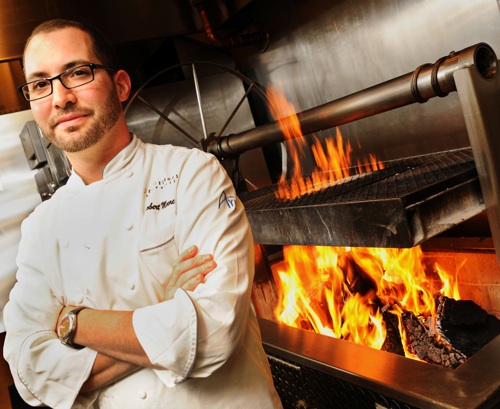 Rob Moore meant to sign up for metal shop when he was in seventh grade. Instead, a friend accidentally enrolled him in home economics, and a chef was born that first day he made cinnamon buns.

Moore can blame that same friend for recommending him for a dishwasher job at The Grenville, a high-end restaurant in Bayhead, N.J. Moore moved up the ranks and across the river to Manhattan with a stop at Lespinasse, where he cooked under Gray Kunz. “I thought I was a pretty good cook until I worked at Lespinasse,” Moore says. “I learned extreme organization, time management, how to work neatly and, most importantly, to respect product.”

He later spent time at Sammy DeMarco’s breakout restaurants First and DeMarco’s Room before becoming part of the up-and-coming dining scene in Brooklyn. He also remained friends with chef Martin Heierling, a co-worker at Lespinassse, who invited him to be a part of his team at Sensi at the Bellagio in Las Vegas. In 2006, he became executive chef at Jean-Georges Vongerichten’s Prime Steakhouse at Bellagio. Now he moved over to Jean Georges Steakhouse at Aria, where he is the chef de cuisine. He shares his favorite places to hit after work to grab a good bite to eat.

Where do you enjoy eating when you’re not working at Jean George’s Steakhouse?
My favorite place in town is First Food and Bar. You can find me there after work some nights but mostly for their amazing Sunday brunch. During football season, they play the games on their many TVs and there is also a cool DJ spinning until 3 p.m. Sit in the lounge, ask for Julie, tell them Rob sent you.

I am also a big fan of Joyful House in Chinatown (yes, we have a Chinatown). I have been going there for years, even before I moved to town.

What dishes are most memorable?
At First Food and Bar, the mini burgers and lollipop wings. The mini burgers are made on actual White Castle buns. The special burger sauce makes the whole dish. There are four to an order and you just can't stop eating them. Juicy meat, American cheese, sweet caramelized onions and the burger sauce. Wash it down with Chef Sammy D's special draft beer and you have a winning combination.

At Joyful House, if I am with a group, I get the Peking duck, beef chow fun with black bean sauce, salt and pepper pork chops and some green veggies. The duck is carved table side, taking all the crispy skin off and served with scallions, hoisin sauce, shrimp crackers and a soft bun to stuff it all in there. After they remove all the skin, they break the rest of the duck down and you can eat it on the side. The Chow fun is soft and flavorful. Just when I think I have had enough, I dive back in for another bite of the soft meaty goodness. The noodles are dressed with a viscous soy fermented black bean sauce with sautéed bell peppers and soft flavor beef slices. It’s what I get every time and keeps me coming back. Salt and pepper pork chops are deep fried until crispy. They are topped with spicy, garlicky crunchies and piled on the plate. As with all true Asian food, watch out for the bones. Happy when there’s a group of us and we finished it off. Wash it down with a large Tsingtao.

Grimaldi's, the Brooklyn staple, was close to my heart and home in New York City and is now close to me eight years and 2,200 miles later. I am lactose intolerant so I get a meaty pie — 12-inch personal with pepperoni, meatballs and Italian sausage. Oh yeah, don't forget the chili flakes, oregano, garlic powder and a touch of salt for good measure. I don't think I have ever left a bite on plate, crust included. They have a great wine list and are more than happy to pour you a couple tasting portions if you aren't sure what to get. Bottle prices are very affordable.

It is hard for me to pick a few favorite places as I eat out a lot. My friend texted me today that she is convinced I don't even have ketchup and mustard at home. And she's right!

Why do you enjoy going there?
As far as the restaurants I frequent, I go there because of the consistency of the product, whether it’s good or amazing. I know exactly what I have a taste for and return for it, time and time again. I don't usually venture from what I normally get either. Some places I go to because my friends work there and I like to keep in touch or just to be social and spread my enjoyment to my friends and hope to turn them on to something they normally wouldn't have tried.
· All Dining Confidentials [~ELV~]