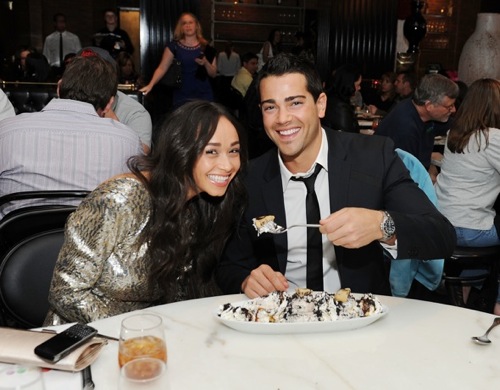 Actor Chazz Palminteri ordered his favorite, a Kobe meatball, and a strip steak at Lavo at the Palazzo on Saturday night. Earlier in the day, Nick Simmons, the son of KISS frontman Gene Simmons, was seen at Lavo’s Saturday Champagne Brunch. [EaterWire]

NASCAR driver Danica Patrick and her husband Paul Hospenthal had dinner at Simon Restaurant & Lounge at Palms Place on Friday night. Patrick enjoyed Kerry Simon’s crispy sesame rice for her appetizer and the big eyed tuna for her entrée. For the dessert, the couple ordered the cotton candy.

On Friday night, actress Laura Prepon from Are You There, Chelsea? and former star of That '70s Show celebrated her birthday with dinner Social House inside Crystals at CityCenter. Fifteen friends joined the actress for sushi and sashimi. [EaterWire]

NASCAR driver Dale Earnhardt Jr. lunched with his wife at Sushi Roku at the Forum Shops at Caesars on Thursday. The couple enjoyed a salad and a selection of sushi. [EaterWire]
· All Coverage of Star Watch [~ELV~]