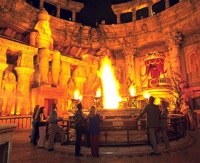 Why, yes, Vegas did have an underground dining room. Well, sort of. James Reza writes in Vegas Seven about Caesars Magical Empire, a former restaurant experience at Caesars Palace, where “guests were escorted through theatrically designed passages to one of 20 dining rooms, where song, dance, comedy and magic were performed up close by personal wizards.” While the family-friendly destination disappeared in 2002, you can still walk through its former haunts, now known as Pure Nightclub. [VS]