Angela Grogan Talks about the First Year at Rí Rá

Share All sharing options for: Angela Grogan Talks about the First Year at Rí Rá 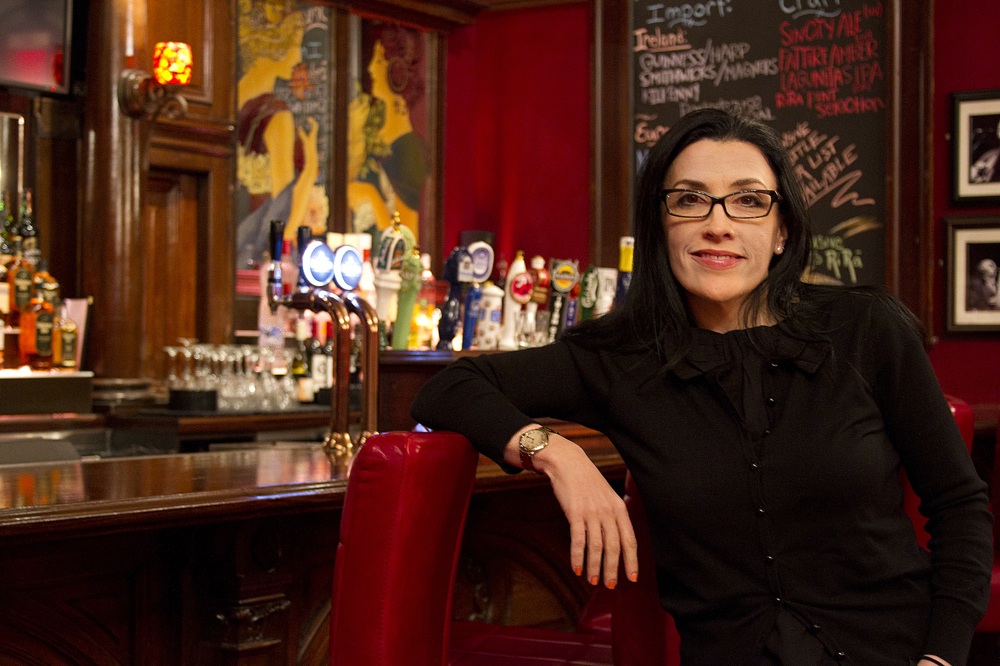 One of Las Vegas’ most original Irish pubs picked St. Patrick’s Day last year as the perfect time to open its doors. Angela Grogan, the operations director of Rí Rá at Mandalay Place, hails from Ireland. She relocated in Charlotte, N.C, 14 years ago when Rí Rá opened there and moves from city to city to help with openings. But Vegas, the first West Coast outpost of the Irish pub, is a bit different from other locations, and Grogan has stayed on for a year.

While authentic salvaged pubs from Ireland decorate the interior, it’s the staff from the Emerald Isle, who come over for one-year stints to learn the hospitality industry, that lends an air of authenticity to Rí Rá. Some who started their stint a year ago have already returned to Ireland. One fell in love and stayed. And a new group came on board just as St. Patrick’s Day hit last week.

Eater Vegas caught up with Grogan to chat about the first year in the business, lessons learned and the current state of Rí Rá.

How did Rí Rá come together?
We looked for a long time in Las Vegas. [Owners] David Kelly and Ciaran Sheehan always wanted to go to Vegas. We spent a lot of time seeing what was the right fit for us, like five or six years. When we found the location at Mandalay Place, we looked at it for a good year. Mandalay Bay is a great casino with a great reputation. We have a good long-term relationship with them. They’ve been a great landlord for us in the past year. We found that we’re not just relying on tourism traffic. We’re committed to the locals. Obviously with having the convention center as well, one of the largest, has been wonderful for us.

Why open a location in Las Vegas?
Well, it’s Las Vegas. Who doesn’t?

Everyone will say to you have to go to Vegas to experience the best of the best. This was an important and a logical move for us. Most of our business is on the East Coast with some in the Midwest. This was just too good an opportunity to pass up. It helps us build our name.

How has it been different in Las Vegas than in other cities?
Well, I think it’s really what people say. People forget who they are. They come to this oasis for a couple day break. You really do forget time. We found that people are out to have a good time.

It’s different because it’s the casino business. You don’t always know your business trends. Usually there’s lunch, a lull, happy hour, dinner. With Vegas as such a vibrant city, it can be an all-day business. Monday can be busier than a weekend. You have to be prepared all the time. It can be a mellow day, and then a convention lets out and you go from half full to full full. Once you understand how it works, you can manage your business pretty well.

What did you learn?
Always be prepared seven days a week. I think as well it’s all about the experience. People are more cautious with their spending. I think it’s really important that you care about your customer, that you’re really connecting with the guest. That’s something we’re really focused on with the team. It’s not just another table you want to turn. It makes a difference for guests. It’s not as easy to get people in. If you take care of them, they let their friends know.

What were you thinking about in terms of design?
Ciaran does all the design for us. A lot of bars will bring pubs over, based on an old design. We buy salvage that we think we can make into something. We have a master craftsman in Ireland who will restore a lot of stuff and try to make it as authentic as possible. We try to replicate some of the great bars in Ireland.

The front bar was originally Ciaran’s auntie’s pub. It’s over 100 years old. We used the original fittings and flooring. Those kinds of pubs are all over Ireland and called shot pubs. It might be the pub and the grocery or the pub and the funeral parlor. We have an authentic one that was a grocery store and a pub.

The second bar is from a Victorian pub. It’s a pub you see a lot in cities with mahoganies and woods. The glass and chandeliers are authentic, and the back bars are rich and vibrant.

The back room is our theater bar from salvage from the Olympia Theater in Dublin. Years ago U2 would have played there before they got big. That area is about theater and plays.

The next room pays homage to Irish whiskey. We managed to salvage old jewelry cabinets and show our 138 whiskies there.

The last room is a new idea for us. It’s a throwback to the late ’60s and ’70s, all original from Ireland. It’s very different from the rest of the pub.

What was the menu testing process like?
It was quite a struggle for us to take stuff off the menu. Las Vegas is not seasonal with the needs.

Six months in, what changed?
I suppose our biggest thing was we do live music seven nights a week from Ireland and the U.S., with a second wave midnight onward that might be a younger demographic top 40 format. We felt the customer didn’t respond to it. We found the customer said, no we enjoy the Irish music. After three to four months, we expanded Irish bands to 2:30 in the morning. The music is more lively, not just traditional Irish music.

It doesn’t have a full-on nightclub feel. Our demographic skews older.

Does it seem like it's been a year?
Crazy enough, no. In some ways it seems longer. We settled in pretty well in Vegas. We were ready to go again for St. Patrick’s Day. It was a good time for an Irish pub to open for the customers. Both the training and operational end were an absolute nightmare. Once you say you’re doing it, you’re doing it. We have a great team around us.

What's the must order dish of the moment?
Fish and chips are the most popular. Our corned beef and cabbage is brined in house for 14 days. Our bacon and cabbage uses boiling bacon very similar to corned beef, but more traditional. It’s almost like a Canadian bacon and comes with boiled or mashed potatoes.

Our dinner entrees include Irish bistro-style meats and seafood. We try to put an Irish twist to them. We have an all-day Irish breakfast that a lot of people call a heart attack on a plate. It’s our hangover remedy.

What's on tap for the future?
I’ve been based here for a good amount of time. We keep building the business, not neglecting our customers. Our main focus is building the business here. Hopefully we’ll find locations in other cities that complement Vegas.
· All Coverage of Rí Rá [~ELV~]
· All One Year In Coverage [~ELV~]