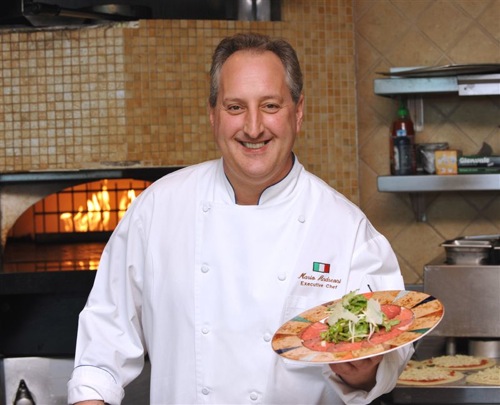 Italian-born Mario Andreoni hangs up his chefs coat at Panevino Ristorante & Gourmet Deli, where he is the executive chef. He got his start in Venice, his hometown, where he landed his first restaurant job at age 15, then went on to attend the Hotel & Restaurant School in Venice. He landed at Hotel Cipriani’s five-star restaurant in Venice, where he worked on perfecting Northern Italian cuisine.

Paris was his next stop. The Hotel de Crillion to be specific and its five-star restaurant, where Andreoni learned French culinary techniques. Then he moved to the Dominican Republic to work at Casa de Campo, one of the world’s top 10 resorts, where he oversaw the resort’s five European-style restaurants. That led him to the Biltmore Hotel in Miami where he was the executive chef of its gourmet Italian Pavilion. His reputation there earned him the job at Caesars Palace to become executive chef of its Primavera Restaurant.

From there, he went on to Café Michelle West and Ferraro’s Fine Italian Dining Restaurant. In 2000, he became the executive chef at the Stratosphere overseeing a staff of more than 280 and the entire culinary operations for the property. Now he has Panevino with its Italian cuisine and views of the city. He shares his favorite places to dine when he’s not in the kitchen.

Where do you enjoy eating when you’re not working at your own restaurant?
My favorite restaurants are all non-traditional Las Vegas gems. Away from the glitz and glamour of the Strip, there are a few low-key places that always exceed my expectations and leave me anxiously awaiting my next visit: Tony Roma’s, I Love Sushi and Sunrise Café.

What dishes are most memorable?
Tony Roma’s — The Baby Back Ribs are tender and delicious. They slow-smoke the seasoned pork with select spices and then baste the ribs with an amazing tangy signature sauce. I usually start with the Half Onion Loaf and then pick two sides to accompany my meal, like corn on the cob and loaded mashed potatoes. The location on East Sahara Avenue is a famous Las Vegas classic!

I Love Sushi — The smoked Eel Anguilla is mouthwatering, fresh and tender. This restaurant is a hidden gem and one of the best sushi places in town.

Sunrise Café is a locally owned Las Vegas favorite. You can really feel the love that goes into every carefully made dish. The service is amazing and I always feel at home. My favorite entrée is the California omelet with avocado and tomatoes. It’s a simple, but amazing breakfast.

Why do you enjoy going there?
The qualities that I value most in any restaurant are: great personalized service, a unique and carefully constructed menu, timeliness of food orders and cleanliness.

All of my favorite restaurants share these characteristics and make dining in their establishments a pleasure!
· All Dining Confidentials [~ELV~]