Nick Starr Talks about the First Year at The Martini

Share All sharing options for: Nick Starr Talks about the First Year at The Martini 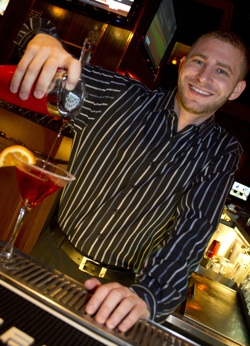 It was no joke when The Martini opened on April 1 last year. The restaurant and bar is an incarnation of its former self, known then as Martini’s, a Westside staple for gaming, cocktails and food. While martinis are naturally the focus of this neighborhood joint, the menu of American fare shouldn’t be overlooked. Nick Starr, the food and beverage director for the bistro who runs the restaurant with his mother Sandy Starr, talked to Eater Vegas about what the first year of running the operation entailed.

How did The Martini come together?
We were looking for a bar and had looked all over town. Many of the places we looked at were way too far away. I’ve lived within two miles of here all my life. One day we saw a lock on the door, called the landlord and leased the space.

How long was it closed?
Before we got it, five and a half, six months. But it took us much longer to reopen.

The existing space was a similar concept bar and the design of the space worked with that. We weren’t going to reinvent the wheel. We decided to create a place we wanted to hang out at.

We went and hired one employee worked at the previous establishment. The others were ready to make a move from similar places. Our biggest promoters are our staff. Our bartenders are like a street team.

Unlike other places, we’re not crazy volume but we do an insane amount of repeat business. We try to be the upscale Cheers, the neighborhood bar. People come in four times a week. We do real well with couples hanging out after work.

We’re probably one of the only nonsmoking bars in town even though the law was repealed. We maintain a cleaner, nicer atmosphere.

What changes did you have to make in the transition?
From an architectural and structural standpoint, nothing. We brought in a new sound system and rewired the place for high definition. We have two projectors for sporting events.

We matched the wood identically for shutters (between the bar side and the restaurant side) for private parties We can have a sit down dinner for up to 50 people. These walls used to be open. This just makes it better for the restaurant.

What did you learn?
My relationship with my mother has gotten outstanding. She’s the hardest worker I‘ve ever seen. She is the first one here and the last one to leave a lot of times. If you didn’t know you, you wouldn’t know she was the owner. She’ll clean tables, get on her hands and knees even after being here 12 hours.

What’s old is new in cocktails. If you want great new stuff, have to go over the top. Bartenders are doing the same thing. You have to put a little pizazz on stuff.

What was the menu testing process like?
On the food menu we went for fun and nice. We wanted to be a neighborhood place you could visit several times a week. Our cheese plate is served on a Napa Valley cabernet barrel. We have filet, ribeyes and Kobe beef meatballs. Our chef makes a special every day. We started serving soup in the winer, and we saw our biggest increase in volume with that.

For breakfast, instead of steak and eggs, we serve a petite filet with any kind of eggs, red velvet flapjacks and Disarrono amaretto French toast.

One of the big things I learned with the cocktail men — it was all fruity and sweet drinks when we opened. Half of the menu turned into classic drinks with the Mad Men influence — Gibsons and sidecars and manhattans. I knew people would want them. I didn’t know they would be as popular as they were.

We have a great S’more martini with a graham cracker rim and a Liquid BLT with seasoning and tomato juice. We switched it to bacon wrapped in olive.

Also low calorie drinks have been big. We added low calorie and classics drinks. We condensed what we had on the cocktail menu in half to accommodate.

Has the neighborhood embraced the restaurant?
It’s a family atmosphere. I may not call you to hang on your time off. But everybody knows each other. We have a small staff that’s like a family atmosphere on a first name basis with 90 percent. We know your first and last name, whether you have kids, what you do for a living.

We have great customer loyalty.

Typical big high-volume places can market to all of Las Vegas. We take more of a rifle approach. One day they bring their neighbor, and three days later that neighbor brings in their friend. We don’t take anyone for granted.

Six months in, what changed?
We made a revamp on the menu.

We made the right decision as far as location. We just had good people. We have nice, kind, loyal customers. After six months, we knew we had the right concept. People were enjoying it.

After a drink or two people don’t hesitate to tell you what they like and don’t like.

Does it seem like it's been a year?
Sometimes it seems like the time flew by and sometimes it feels like it’s been longer. It’s just weird to look at holidays and we have something to base it on. It’s not a crap shoot anymore.

What's the must order dish of the moment?
Chef Adam Williams: Probably the chicken scaloppine. It’s delicious. We’ve had reviews in the paper. It’s a dish you don’t see a lot.

What's on tap for the future?
Hopefully take care of every one the best we can so they come back. We want to stay adaptive, try new ideas while sticking with what worked for us. We’re focusing on making this one of the best bars in town. I love it when couples come in for date night.
· All Coverage of One Year In [~ELV~]
· One Year In Across the Eater Universe — April ’12 [~EN~]
Nick Starr [Photo: Chelsea McManus]