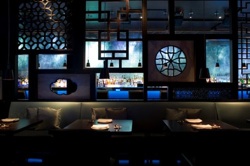 Hakkasan’s New York branch opens today with a $10 million resto in Times Square in New York. Hakkasan plans to open late this year at the MGM Grand, one of three additional expansions of the London-based Chinese luxury restaurant chain planned for 2012, to take over the former Studio 54 space. The New York Times has a detailed look inside the restaurant, including waitresses dressed by Diane von Furstenberg, $888 Japanese abalone with black truffle, whole suckling pig for $295 and a Peking duck with Kaluga caviar for $345. [NYT]