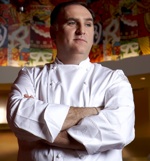 The chef behind Jaleo and China Poblano at the Cosmopolitan of Las Vegas has his eye on Brooklyn for his next location. Eater New York reports that Spanish chef José Andrés “might be setting his sights on New York. Over the weekend, Andrés remarked, ‘When I do it in New York, I want it to be a big deal. I want to make sure I'm ready when I make it there.’” No word on the location yet, but rumor has it the space will be something slightly upscale. [~ENY~ via Grub Street]