Prime’s Sean Griffin Has a Weak Spot for Pho

Share All sharing options for: Prime’s Sean Griffin Has a Weak Spot for Pho 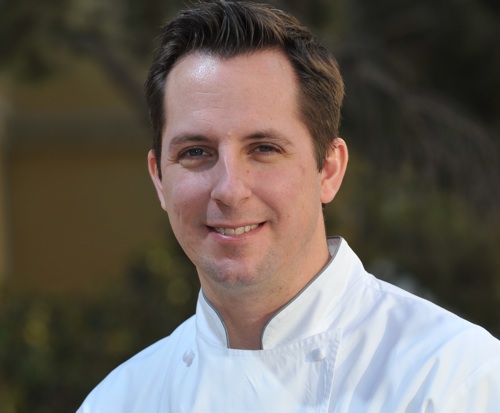 Sean Griffin was born into a restaurant family with a father who was classically trained in French cooking. So Griffin learned the hard way, by peeling potatoes for his father, who exposed him to his methods. Sadly, when his father died when Griffin was 21, he took over the family restaurant in California.

That foundation readied Griffin for his next move as a cook at the Mission Inn Hotel in Riverside, Calif. His hard work there, learning every kitchen station, caught the eye of chef Gary Palm, who scooped him away to become chef of the AAA Four Diamond Duane’s Prime Steaks & Seafood. Five years later, he became the chef de cuisine at the Four Seasons Hotel in Beverly Hills, Calif. He’s worked under Rick Tromonto, Charlie Trotter and Thomas Keller.

In 2003, Griffin made his way to Vegas as chef de cuisine for the now-defunct Nero’s Restaurant at Caesars Palace, where he made a name for himself preparing whimsical, creative yet accessible dishes. Then he took a detour to Michael Mina’s Bourbon Steak in Scottsdale, Ariz., where he served as executive chef.

Now he runs Prime Steakhouse at the Bellagio, Jean-Georges Vongerichten’s first restaurant in Las Vegas. Griffin shares his favorite places to dine in Vegas when he’s not wearing his chefs whites.

Where do you enjoy eating when you’re not working at your own restaurant?
Pho Kim Long, Aburiya Raku and Julian Serrano at Aria.

What dishes are most memorable?
Pho Kim Long — I am somewhat new to the Pho phenomenon and have fallen in love with the Vietnamese noodle soup. I like the idea that you can customize it to your flavor likings by adding accompaniments such as Thai basil, chilies, hoisin sauce, lime and mint. Hoisin sauce is my "secret weapon," adding a sweet-salty-spicy character to the pho. I have had the chicken as well as the "special combination" pho, which consists of braised flank steak, rare beef, tendon and meatballs on a continuing journey of eating my way through my new favorite soup.

Aburiya Raku — I love the fresh tofu, especially the fried version served in broth with salmon roe and mushrooms. The texture of the tofu is like custard and the combination of flavors alongside the "pop" from the salmon roe makes this a must-have every time I visit.

Julian Serrano — I was there last week and Julian Serrano fixed a plate consisting of crispy French fries that had nuggets of chorizo mixed in. The whole dish was topped with a couple of sunny-side up eggs. It was called "Huevos Estrellados." The result was the ultimate in comfort foods and very addictive. I'm having withdrawal symptoms just thinking of it!

Why do you enjoy going there?
Since I usually get out of the restaurant pretty late, I enjoy the late hours at Pho Kim Long and Raku. The food at all three is exciting and different. They all hold my interest and keep me coming back for more.
· All Dining Confidentials [~ELV~]
· All Coverage of Prime Steakhouse [~ELV~]