Angel Porrino Closes Out the Lavo Brunch and More

Share All sharing options for: Angel Porrino Closes Out the Lavo Brunch and More 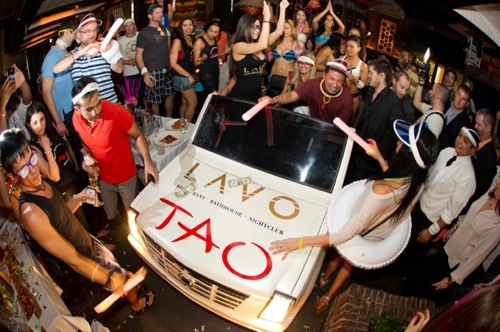 Lavo at the Palazzo hosted the final Saturday Champagne Brunch of the season to make way for the start of pool season. Angel Porrino of Absinthe hosted the soiree, serving as honorary lifeguard. The celebration even included a special Champagne delivery via the Lavo mini-Escalade, which drove through the packed party filled with bubbly. On Saturday night, rapper Tyga dined at the restaurant. Actress Beth Behrs from the CBS sitcom 2 Broke Girls dined at Lavo with friends, sipping Lavolini specialty cocktails while dining on pizzas on Saturday night. [EaterWire]

Country singer Taylor Swift celebrated her Academy of Country Music win at Yellowtail at the Bellagio with a large group of family and friends on Sunday night. She ordered big eye tuna pizza, Tai snapper and Kobe beef tataki. As a special treat, the restaurant engraved Swift's name on a pair of chopsticks and presented them to her as a gift. [People]

On Friday night, actress Katrina Bowden from 30 Rock and the new American Reunion dined at Social House at Crystals with her fiancé Benjamin Jorgensen and friends. [EaterWire]