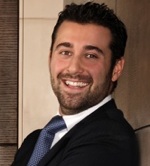 Rumblings from some high level Caesars Entertainment culinary brass have indicated that Franck Savoy (yes, the son of Guy), who recently left his post as the resort’s director of food and beverage to helm the culinary efforts at the Four Seasons New York, may not be working with his father’s competition for much longer. The source states that, “The Four Seasons may be looking to revamp some of their culinary offerings, including L' Atelier.” Developing. [EaterWire]