Two Weeks In is a series where Eater Vegas talks to the chefs and restaurateurs after their first two weeks in business at a new restaurant. 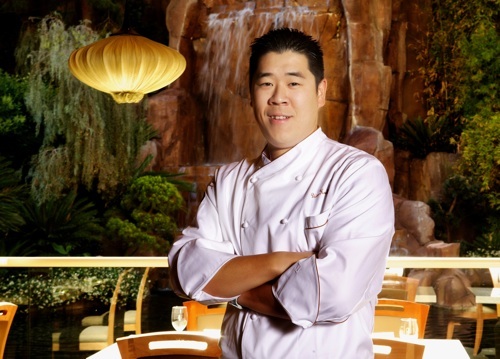 On Friday afternoon, executive chef Devin Hashimoto took time out of his hectic day to talk about the first two weeks of Mizumi, the renovated former Okada space at Wynn Las Vegas. He arrived at the restaurant at 5 a.m. for a video shoot for the in-room channel, and had already put in a 10-hour day without serving a single meal. Now he’s getting acclimated to the long days of running the restaurant after a three-month haitus. Hashimoto talks about how the menu has been received, any bumps in the service and just what Steve Wynn thinks of his latest opening.

So, how's it been going?
It’s going great really good. Business has been picking up tremendously especially during the weekdays. I would say it was a more conservative opening. After that Monday, it was kind of slow, it started picking up. This week was a big increase.

Did a lot of your staff come from Okada?
One hundred percent and then we had to add new staff to accommodate the increased seating.

Any big hurdles in the opening weeks?
We had two play days. I think the first one was a bit of a challenge. Forty percent of the new menu is new items. We have a new microsystem, new floor plans. The second night was smooth. The first day was tough because we were doing it at lunch time. Opening night I thought was smooth.

What have people been responding to on the menu?
Great comments. A lot of them have said that it’s changed since last year. When I got here, I slowly tried to implement change. This change with the opening there was a lot of pressure. There’s so much pressure to deliver a menu change that was substantial. I think 40 percent was a lot for my staff. It’s pretty straightforward. We added a bigger lobsters tank in back. We have live prawn, fluke. Overall the guests have been receptive.

With the Omakase menu, we listed it on the page with every course. I thought it was somewhat aggressive to do that. There were items I wanted to highlight. We brought a lower price and the first night we sold 15. That was a record. I think we’re averaging 10 a night now, which is ideal.

What have you been eating?
I eat a lot at home. My wife cooks for me. She cooks a lot. She cooks a lot of Korean food. Today I had a doughnut and I had two double espressos, a five-hour energy drink and I’m still ready for my next double.

My wife always asks, “Why don’t you eat at work?” It’s so busy, you don’t think about food. Those three months we were closed, I would get hungry and eat dinner. Here you get so occupied with your daily things. At the end of the day, I hurry up to go home. I love ice cream. There’s a lot of ice cream in the fridge.

We have a tofu salad punched out in rounds like buffalo mozzarella. It’s served with a miso dressing and a soy balsamic reduction. I’ve been working to find the right ingredients to pair and make sure it fits. I think that’s what I’m trying to shoot for.

Has Steve Wynn been in to dine?
Yes, he’s been in eight times already.

So he kind of likes it?
Yeah, I’d say so. I’m happy. He’s happy. It’s all interesting. He was very happy the first day he came in.

He was here not last night but the night before. We had a lot of VIP tables. I want to touch every table.
· All Coverage of Mizumi [~ELV~]