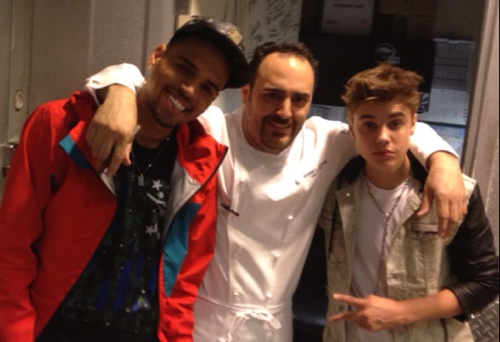 Singers Chris Brown and Justin Bieber stopped by N9NE Steakhouse at the Palms on Sunday after the Billboard Music Awards with a group of 30 friends Bieber and Brown both started off with N9NE’s signature rock shrimp, followed by an 8-ounce filet for Bieber and Surf n’ Turf for Brown. The table shared N9NE’s signature mac and cheese and lobster mashed potatoes. Following dinner the duo stopped by the kitchen to see N9NE’s executive chef Barry Dakake and to add their signatures to his famous “shakedown door” covered with other A-lister names who have visited the steakhouse. [EaterWire]

Future Planet Hollywood headliner Cee Lo Green dined with a group of friends at Martorano’s at the Rio on Sunday night. He ordered the veal parmesan and Martorano’s meatballs. The restaurant by Philadelphia-native Steve Martorano just celebrated its five-year anniversary. [EaterWire]

Modern Family's Ty Burrell and Julie Bowen, who were in Las Vegas to co-host the Billboard Music Awards on Sunday night, had dinner at Scott Conant's Scarpetta at the Cosmopolitan of Las Vegas on Saturday with a group of friends. The funny duo enjoyed a quiet dinner, and Burrell was overheard rehearsing lines with Bowen in between bites of his ribeye and potato gratin. Actress Kirsten Dunst along with five girlfriends had dinner at Scarpetta on Friday night. [EaterWire]

Actor David Arquette stopped by Sushi Roku at the Forum Shops at Caesars on Sunday night for a quick bite with a friend after the Billboard Music Awards. [EaterWire]

On Sunday night, British boy band The Wanted dined at Lavo at the Palazzo, where they were joined by manager Scooter Braun and singer Carley Rae Jepsen, who also posed for on the red carpet with them. Nikki Reed celebrated her 24th birthday with dinner at Lavo on Saturday night. Model Angie Everhart also dined with her boyfriend and friends. Kristina Guerrero from E! News was spotted at the Italian eatery sipping Uva Bianco specialty cocktails and enjoying seafood alfredo and spaghetti and meatballs with friends. [EaterWire]

Singers Kelly Clarkson and John Legend dined at Wolfgang Puck Bar & Grill at the MGM Grand separately on Saturday afternoon. Clarkson was dining with her mom and a friend, who ordered soups and salads. Legend was dining with friends, who ordered three dishes of wings, three orders of ribs and a couple Chinois Salads. [EaterWire]

Dallas Mavericks owner Mark Cuban and his power forward Dirk Nowitzki were spotted at Society Cafe at Encore Las Vegas on Friday for the start of Nowitzki’s bachelor party. [EaterWire]

On Saturday night, singer Taio Cruz dined at Tao Asian Bistro at the Venetian. He returned on Sunday night and ordered the orange chicken. Nikki Reed was spotted dining at Tao Asian Bistro on Friday night. The Twilight star was joined by her husband Paul McDonald of American Idol fame and friends including Alexa Vega, the now grown up star of Spy Kids. Reed, a vegan, enjoyed special dishes from the chef as they dined under Tao’s Buddha. [EaterWire]