Share All sharing options for: Greg Costello on the $250,000 Nights at Hyde Bellagio 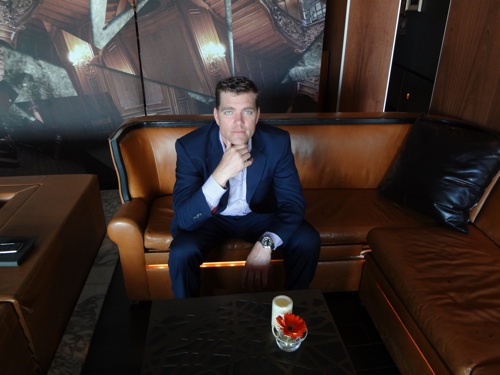 Here is Greg Costello, the director of VIP services for sbe’s fountainside Hyde Bellagio. Since he’s tenured with the Light Group and the defunct Body English at the Hard Rock Hotel, he’s definitely equipped to part some words of wisdom.

How did you get started?
I actually started with Light Group in 2003. I am originally from Cincinnati, Ohio, and knew some guys like Sean Christie [who now co-owns Encore Beach Club and Surrender Nightclub at Encore Las Vegas]. I was a stockbroker and the market was not too good and Cory [McCormack] and Sean invited me out to interview with [Light Group owner] Andrew Sasson and I was a doorman a week later. I was with the Light Group for 10 months and Corey and I left there to open up Body English and I was there for the last seven years. I left there two years ago and waited it out a year, consulting for Marquee on their Monday night and got on board with sbe.

What are some of the more extravagant experiences you can create?
I think the experience that every high roller wants is to be put first with everything. When there is a line of 500 people, we split the sea. Hyde is all about making sure everyone has a great experience, but we definitely have some packages that are over-the-top extravagant. One package on our menu costs $250,000 and comes with a 30 liter bottle of Ace of Spades, a great table, some lavish goodies and let's just say a pretty cool experience that involves the Fountains of Bellagio that you can't find anywhere else.

What’s your biggest night?
Every time we do XIV there are bottle wars and we do $250,00 to $300,00 in this 10,000-square-foot, 40-table room. XIV is a legendary party [in LA] and is fast becoming a legendary party out in Las Vegas. We do it once a month on Sunday and the next one will be on June 3 after Memorial Day. It’s my best night because I get to get loose and let the reigns go. The guys who come in to see me come in to have a good time. The locals are participating and our coming dress up and ready to party. In fact some of the people from [another club] are not allowed to come anymore because none of them showed up for work on Sunday night.

What’s the best time to arrive?
Early. You don’t get to see the fountains unless you arrive before midnight. That’s one thing about the XIV party that I love — the party is raging with 500 to 600 people in here and while at the bar you look over and the fountains are going off (XIV starts at 5 p.m.).

If someone shows up at the door at 1 a.m. on Saturday of Memorial Day weekend, are they screwed?
Basically for us with it being a small intimate club, our goal is to make a great looking crowd and keep it that way. One of the problems with the larger venues is that they have to let so many people in to fill the place. Unfortunately, there are not that many quality/top level people and our goal is to keep it the best looking crowd in Vegas. So if you come at 1 a.m., most of it is going to depend on what you look like, who you’re with and how many girls you’re with. It’s not about money or tips at the door. It’s also not about bottle service — we’ve turned away $5,000 bottle minimums because it just wasn’t the right look for the club. We very much care about what our clubs looks like inside.

Is that sustainable in Vegas?
From the feedback I’ve gotten, it’s refreshing. When we had Light and opened Body English it was very much an A crowd, but with so many club opening it’s hard to bring that A crowd together. I think we have done a very successful job of it here and I think anyone who visits Hyde Bellagio will agree with that.

What’s the craziest thing you have seen a group of guys do to get into a club?
One guy came in a suit and tie and everyone else was in black and white suits wearing radios. They called in that he was a sheik and that we needed to take care of him and that he would be with security. They came into Body English and about 30 minutes into it we realized it was all a joke. They were a bachelor party, but they pulled it off and they got a great table for it!

What about a group of girls?
Back in the day when Vegas was the wild West, we used to get a lot of flashers and things like that, but you can’t do that anymore. Now they flirt and when some of them are good looking they push those girls forward. You see three good looking ones, but behind them might be a different story.

Are people really dropping $100,000 in a night?
I’ve kind of grown up through the whole thing. When I first started only wealthy individuals would buy bottles. Now bachelor parties will pool their money and buy bottles. Today the big guys, the biggest of the big, are now going more than they ever have. You will hear stories of clients that will spend that kind of money, so that group has gotten larger as the group of [bottle services customers] has gotten larger too.

When you’re not working, do you go out?
It’s funny. I got audited and not a regular tax audit, but an informational tax audit. I had an argument with the lady for three hours over whether what I do when I go out and have a drink is work or pleasure. She told me it wasn’t work and I said, ‘Look, I never go out and have a drink unless it’s work related.’ So whenever I’m out I’m working either going on an outing or visiting a client. If I’m not out at a nightclub I am having dinner with my wife or at home with my wife and kids.