Ron Randazzo on 27 Years at The Steak House

Share All sharing options for: Ron Randazzo on 27 Years at The Steak House 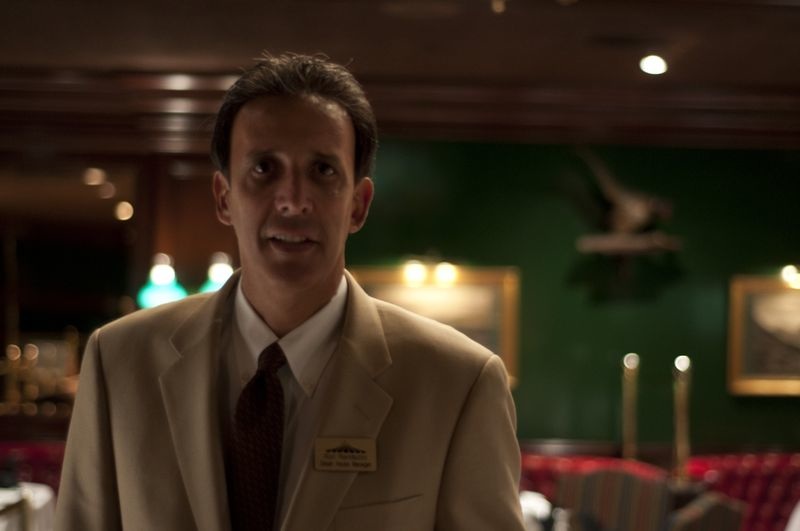 Ron Randazzo knows where the bodies are buried. He has enough information to put people behind bars. He keeps most of the good stuff to himself. Next month, Randazzo celebrates 27 years as the manager of The Steak House, the restaurant at Circus Circus celebrating its 30th year in business.

“I started as an assistant buffet man,” he says. “We set a record with 16,400 people in one day.” His bosses were so impressed that he was promoted to assistant shift supervisor on graveyard. As Randazzo tells the story, he worked for one day a week at The Steak House to give the maître d' a day off. “It was only supposed to be for a couple of weeks. We’re still looking if you know anyone.”

So, what's the busiest time right now?
Between 7 and 9 p.m. is pretty much that’s the busiest time. We do have a little bit of a rush from 4 to 6 p.m. with the half-price cocktails every day but Saturday.

It’s 7:30 p.m. on a Saturday night, what's the wait for a table?
If you just walked in, I’d say 20 to 30 minutes or sometimes it’s two hours. It just depends on how busy we are. I’m always telling people to wait in the bar. There’s always a no show.

Surely been offered gifts or cash in exchange for reservations or a table. What have people tried?
One guy tried a dollar bill and held it in front of me and said, “Are you sure you don’t have a table?”

One hundred or $200 is what most people say their going to do. Usually if they offer, they don’t mean it.

Tell us about your favorite customers.
The guy with the hundred dollars. Kidding.

We’ve had a lot of regular clientele over the years. We have a gentleman who would come in every Sunday for 25 years. They’re happy to see we’re still here, and we still have the same crew. One couple came in and said, “We got married here 26 years ago so I know that’s when you started.”

And now we have people who came in when were just married, had kids and they’re bringing their kids in. We have one customer from Chicago who pretty much brought a house here to spend more time in The Steak House.

If I retired, I would probably sit at the bar. I know so many people.

How do you deal with VIPs when there are no tables to give?
I would pretty much ask them to sit at the bar. I’ll do my best, and tell them I don’t have a table at this time. I’ll even buy them a drink if it’s a VIP from another hotel. I can start them off with an appetizer if they’re really hungry. Most people understand. They don’t give you a hard time.

Tell me about the craziest times at The Steak House.
We get a lot of people from other hotels. We do have more children than at other hotels.

We do have a lot of bachelor and bachelorette parties. It can get a little loud.

So, what's the strangest request that you've accommodated at the Steakhouse?
Cooking a steak raw, 30 seconds on each side. It was a filet mignon.

Do you ever get any requests for vegetarian dishes here at The Steak House?
Very rarely and we try to accommodate them. If I know ahead of time, I’ll get some eggplant, squash and carrots to grill.

Right now we have a lot more fresh vegetables on the property as long as we know in advance. Gluten free is big now. Most of our menu is fluten-free so we’re OK there.

So, when you're not at the Steakhouse, where are you eating these days?
Mastrioni's is a little Italian bistro. I’m trying to eat healthy. I just go off Crestor.

The buffet in the Bellagio. I like the salads.

What's the must-order dish at The Steak House?
The lamb chops are unbelievable. It’s three double-cut chops from the rib section out of Colorado.

At the end of the day, what's the one Gatekeeper tool you need to get the job done?
Don’t look at it as a negative if you do have a problem. If a customer brings a problem to your attention, try not to be so defensive. Everyone’s going to have a problem every once in a while. Make sure the customer leaves satisfied with the way you handled it. That’s the mark of a good restaurant.
· All Coverage of The Steak House [~ELV~]
· All Coverage of The Gatekeepers [~ELV~]