Due Forni Spreads Its Wings to Austin

Share All sharing options for: Due Forni Spreads Its Wings to Austin 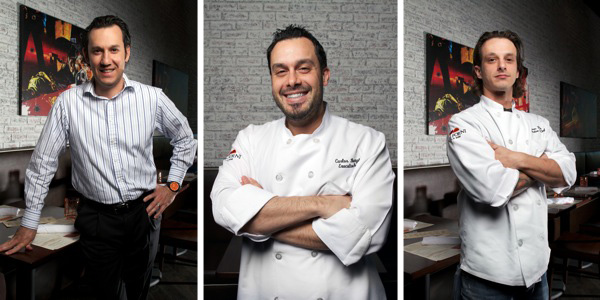 Las Vegas is about to become an exporter of a restaurant instead of an importer. Later this fall, Due Forni Pizza & Wine plans to open its second location, this time in Austin, Texas. Alex Taylor, an alum of the University of Texas at Austin, and chef Carlos Buscaglia found space in the historic Littlefield Building at Sixth and Congress, right in the heart of the state capital.

“For a long time, Las Vegas was a knock off. We’re proud represent Las Vegas in Austin as something homegrown,” Taylor says.

Due Forni plans to bring its dueling Napolitano ovens to Austin to offer Roman and Neapolitan pizzas. The menu there will be similar to Vegas as well, with some new dishes that make an appearance as specials here added to the mix such as a duck confit pizza, Yellowtail crudo and a scallop dish. “Austin is huge with the farmer’s market so most of the menu very seasonal,” Buscaglia says.

Like in Vegas, Buscaglia will use the pizza ovens to cook up rack of lamb, duck, wild salmon and pastas. He’s been busy working with purveyors to land the same bufala mozzarella from Campania, San Marzano tomatoes from the hills surrounding Mount Vesuvius and blue label Prosciutto San Daniele so the dishes will taste just like in Vegas.

The wine and beer programs will also get a boost since Sixth Street is known as a drinking haven. Taylor says he plans to develop the craft beer and cocktail menus there.

Like the Vegas version bathed in Longhorn orange, Taylor says the Austin outpost will have a similar look and feel. Interior designer Todd-Avery Lenahan of ABA Design here in Vegas is building out the space, a bit bigger than the Summerlin restaurant, and will work around the challenges of a historic building.

The move means Taylor will relocate his family to Austin, but make frequent trips back to Vegas. Buscaglia will oversee the menu in Austin, and brought Sean Zirkle on board to serve as executive chef of Due Forni Austin. Zirkle has been with Due Forni since it opened in 2011, and worked with Buscaglia at Fiamma at the MGM Grand, as well as at Emeril’s Fish House.

Don’t think the move to Austin means Due Forni is ignoring a second location in Vegas. “We want to do another place in Vegas and when that opportunity comes along, we’ll jump on it, Taylor says.

Eater Austin has more details on the new location.
· All Coverage of Due Forni [~ELV~]