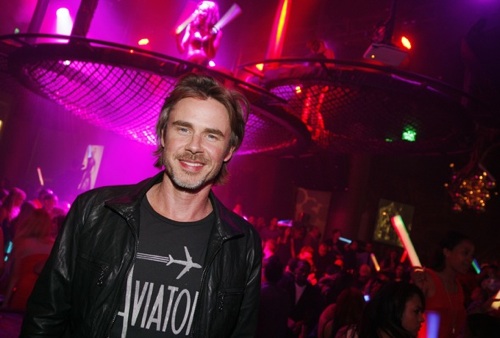 Paula Deen visited Old Homestead Steakhouse at Caesars Palace on Tuesday night with a group that appeared to be friends and family. Deen donned a baseball hat pulled low, her hair back, big glasses and no makeup. Even the restaurant staff didn’t recognize her. Chef Timothy Henderson came out and spoke to Deen and her husband and they each special ordered a 4-ounce filet, steamed broccoli and sliced tomatoes. Her husband mentioned that he’s on a diet. The table even ordered warm banana pudding, Big Fat Chocolate Cake and the Iron “Baked” Chocolate Chip cookie. [EaterWire]

True Blood star Sam Trammell dined at Public House at the Venetian, where he ordered the Pub Burger and chatted with friends on Saturday night. [EaterWire]

Henrik Lundqvist of the New York Rangers dined at Lavo at the Palazzo with Shane O'Brien of the Colorado Avalanche, Claude Giroux of the Philadelphia Flyers, and Paul Bissonnette of the Phoenix Coyotes on Tuesday night. Actor Ryan Kwanten dined at Lavo on Sunday night. The True Blood star was joined by his parents for a Father’s Day meal at the Italian eatery. They ordered the Kobe meatball along with sea bass and the signature Oreo Zeppole for dessert. Rapper Kid Ink dined at Lavo on Saturday night. [EaterWire]

Reigning NHL champions the Los Angeles Kings dined at Sensi at the Bellagio on Friday night. Among the Stanley Cup champions in attendance were Jeff Carter, Brad Richardson, Trevor Lewis, Jarret Stoll, Jonathan Bernier, Alec Martinez and Drew Doughty among many others. [EaterWire]
· All Coverage of Star Watch [~ELV~]