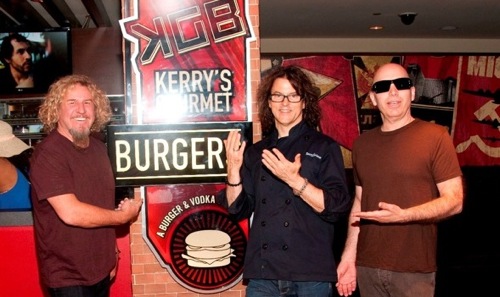 Foo Fighters’ front man Dave Grohl treated his wife of nearly nine years, Jordyn Bloom, to a lavish birthday dinner at Scott Conant’s Scarpetta at the Cosmopolitan of Las Vegas on Saturday. The couple joined by members of their family and friends, ordered four bottles of wine. Grohl surprised the group by ordering in fluent Italian. As a cake was presented to the birthday girl, the rocker gave a happy birthday serenade to his lady, followed with a smooch. [EaterWire]

Kourtney Kardashian's husband Scott Disick dined at Stack at the Mirage for his 29th birthday on Saturday night. [EaterWire]

E! News personality Giuliana Rancic dined with a group of friends at Lavo at the Palazzo on Sunday night. She ordered the Kobe meatball, crispy fried calamari, roasted Chilean sea bass and chicken parmigiano. George Kotsiopolous of Fashion Police dined at there as well with Rob Kardashian. They ordered the classic Milanese, carne pizza and the Oreo zeppole. Actress Stacey Keibler was spotted at Lavo on Saturday night, ordering espresso martinis and the one-pound Kobe meatball. Dancing With the Stars pro Cheryl Burke also dined at Lavo that night with a small group of friends. They ordered the Kobe meatball and caprese salad. Gretchen Christine Rossi of The Real Housewives of Orange County dined at Lavo on Friday night. Her group ordered the one-pound Kobe meatball and chicken parmigiano. They ended their meal with the Oreo zeppole, strawberry shortcake and the chocolate seven-layer cake. [EaterWire]

Dancing with the Stars pro Derek Hough celebrated his 27th birthday with a group of close friends at Tom Colicchio's Craftsteak at the MGM Grand on Saturday night. [EaterWire]

Celebrity chef Cat Cora had a lunch at Holsteins Shakes and Buns at the Cosmopolitan of Las Vegas with her wife Jennifer Cora and a male friend. Cora was In town to judge the Miss USA competition. The group ordered the Artichoke Guac, Gold Standard Burger with sweet potato fries, Ahi sliders and the Greener Pastures salad. [EaterWire]

Celebrating the launch of his new memoir, Most Talkative: Stories from the Front Lines of Pop Culture, Bravo television personality Andy Cohen and his parents dined at Blue Ribbon Sushi Bar & Grill on Friday night. [EaterWire]

Kelsey Grammer and his expecting wife Kayte Walsh dined at Wolfgang Puck Pizzeria & Cucina inside Crystals at CityCenter on Saturday  Grammer started with a caprese salad and for and entree they ordered a TBG and a veal ravioli. [EaterWire]

Comedian George Lopez dined at Spago at the Forum Shops at Caesars on Saturday night with some friends. They had half organic chicken, halibut, lamb, ginger drop martinis, frozen lemon custard, strawberry shortcake profiteroles, margarita flambé and a bottle of pinot noir. Comedian Sinbad also dined at Spago on Saturday afternoon with a friend. They had asparagus soup, chicken Caesar, chicken breast  entree and chicken wings. Jerry Springer and Rick Harrison both dined separately at Spago on Thursday. Springer came in by himself and ordered the arugula salad, halibut and strawberry shortcake for dessert. Harrison from Pawn Stars dined in the cafe with a female and asked to be away from all the traffic. He ordered the halibut and his friend ordered the short ribs. [EaterWire]
· All Coverage of Star Watch [~ELV~]