Share All sharing options for: Christina Olivarez Makes Her TV Debut on Chopped 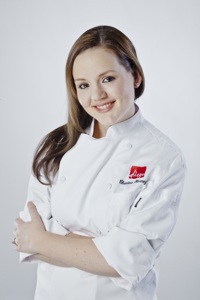 It’s time for Chopped to pit chefs with a limited number of ingredients to cook up dishes against each other over on the Food Network, and already Brian Howard from Comme Ca at the Cosmopolitan of Las Vegas competed on Tuesday night. He made his Sunny Side Apps, an appetizer with corned beef, and ended in a battle royale with almond flour and knodel.

About 25 Vegas chefs, including Christina Olivarez, the executive chef of Diego at the MGM Grand, will be featured throughout the new season. Her episode airs Tuesday, June 19, at 10 p.m.

“It was fun. It was definitely an experience,” Olivarez cagily says. She can’t spill how the episode turned out, but she can dish on what the show was like to film. “It was definitely very stressful. I was trying not to think about being on a TV show that a lot of people watch.”

Olivarez flew out to New York to film in the Food Network studios vying against three other chefs. She had four to five ingredients she had to incorporate into her dishes picked from the pantry. She spent hours watching reruns of the show, trying to catch a glimpse of potential ingredients and getting to know the judges.

She spent hours at Diego doing time trails to prep for her debut on national television. “You don’t know what is coming at you,” she said. She studied basic sauces and desserts, something she says is not her forte. “There was no way I’m going to make a four-hour sauce in 20 minutes.”

During filming, Olivarez says the time she gets to make a dish on TV was identical to the experience. “I would start and have a basic idea. As I got started, different things came to me,” she says.

Until the episode airs, she’s keeping quiet about how she fared. But guests at Diego are already excited about the budding star in their midst. “Guests ask to take a picture with me,” she says. “I hope that it gets my name out there a little more and makes the restaurant more of a destination.”
· All Coverage of Diego [~ELV~]
Christina Olivarez [Photo: MGM Grand]