The Worst Steak Ottavia Bourdain Ever Ate — in Vegas

Share All sharing options for: The Worst Steak Ottavia Bourdain Ever Ate — in Vegas 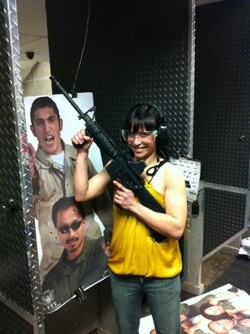 Ottavia Bourdain and hubby Anthony spent the weekend after the Fourth of July in Vegas for the UFC bout where Chael Sonnen challenged Anderson Silva for the UFC middleweight championship at the MGM Grand Garden Arena, and boy did she encounter some shitshows.

Bourdain chronicled what she ate while in Vegas for Grub Street New York, but doesn’t name names. Her Friday started with lunch at a Japanese restaurant at the casino where she just wanted some Hamachi sashimi. “The chef immediately recognizes my husband. He says he has something really special for us. Dread.”

Out roll the freebies, two jumbo rolls: “One is a caterpillar roll, complete with decorative antennae, and the other one is some unidentifiable creation coated in mayonnaise. They are enormous, with layers and layers of mayo, and avocado and tuna of suspiciously bright red color.”

Anthony dutifully eats as much as he can. Ottavia gets a pass.

But the real shitshow comes that night, when they “head downstairs to the celebrity-chef-branded hotel steakhouse for a quick dinner.”

The steak arrives and it has no char. It looks boiled. I cut into it and it’s hard, and gray inside; it’s well done. It also tastes like cheap supermarket meat that was quickly defrosted under hot water in the kitchen sink. And it smells — not dry-aged funk, but some disturbing livery odor. Now, this is a reputable steakhouse, with a famous and respected name on the door, but it was the worst steak I’ve ever had in my life, an abomination. We eat our steaks unhappily, tell the server to charge our room, and slink away, miserable.

Speculation could peg the restaurants, but there were no celebrity sightings of the couple from that weekend and it's unfair to assume they stayed at the MGM Grand.

Know where they ate? Drop us a note on the tipline or name your best guess in the comments.
· Ottavia Bourdain Eats Omelettes in the Bathroom and Peanut Butter in Bed [Grub Street New York]
Ottavia Bourdain [Photo: Twitter]