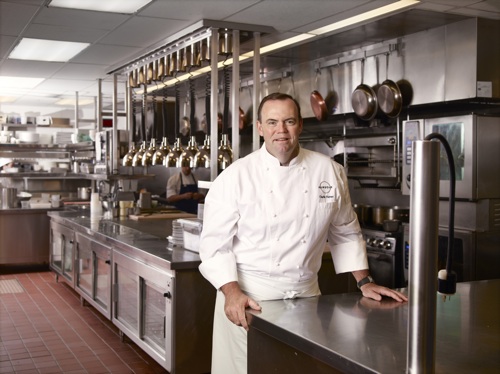 Let the speculation end. Last week, Ottavia Bourdain recounted a story about the worst steak she’s ever eaten without naming the restaurant that happens to be in Vegas. Ottavia and Anthony Bourdain were in town for the Chael Sonnen/Anderson Silva UFC middleweight championship at the MGM Grand Garden Arena. And now that celeb chef whose restaurant cooked the bad steak has come out with an apology for the mishap.

Speculation ensued. John Curtas wrote that the bad steak was at Carnevino at the Palazzo, which led to a flurry of nasty tweets between Anthony Bourdain and Curtas. Bourdain says they did eat at Carnevino, but that wasn’t where they encountered this scenario:

Ottavia Bourdain says the steak "has no char. It looks boiled." Inside, it's "hard, and gray." She says it "tastes like cheap supermarket meat that was quickly defrosted under hot water in the kitchen sink."

In her words: "this is a reputable steakhouse, with a famous and respected name on the door, but it was the worst steak I’ve ever had in my life, an abomination."

Now Charlie Palmer himself owns up to the steak. He sent in an email apologizing for the fiasco.

I am writing to end the speculation about Anthony Bourdain’s wife and the "worst steak" of her life before any more of my hardworking colleagues at other restaurants are implicated.  It was my restaurant: Charlie Palmer Steak Las Vegas. What can I tell you? It is always a downer to hear something like this, particularly when it concerns the wife of a colleague. But it is also frustrating because we only learned about it after the fact, and as a result I don’t know what happened or whose head, if any, has to roll. We spend a lot of time and money sourcing great meat, so naturally, any complaint has my full attention. But since this particular steak wasn't sent back to the kitchen, I'm in the dark.  Hearing about it later is like investigating a murder without a body. So for the record, I am extending my apology to Mrs. Bourdain for her negative experience. But I also wish my staff on hand had been given a chance to do more in the moment.

UPDATE: Anthony Bourdain just responded to Charlie Palmer's apology at 3:53 p.m. PST with this tweet: "@Bourdain: Charlie Palmer, you are a gracious man and a great chef. As we all know, sometimes shit happens. Thanks."
· The Worst Steak Ottavia Bourdain Ever Ate — In Vegas [~ELV~]
· The Bourdains' Bad Steak Wasn't at Carnevino; a Feud Ensues with John Curtas [~ELV~]
· All Coverage of Charlie Palmer Steak [~ELV~]