Scott Pajak Hits a Home Run When Not in the Kitchen

Share All sharing options for: Scott Pajak Hits a Home Run When Not in the Kitchen 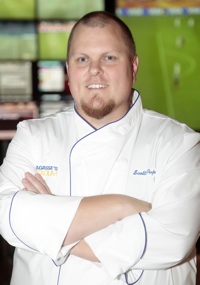 Scott Pajak has spent a lot of time with Emeril Lagasse. His first gig after graduating from the UNLV Culinary Arts program was in the kitchen at Emeril’s New Orleans Fish House at the MGM Grand, where he worked every job in the kitchen over nine years. Then last year in May, he landed the big gig, chef de cuisine of Lagasse’s Stadium at the Palazzo. When he’s not working to feed hungry fans there, Pajak enjoys watching the game and cooking some of his favorite tailgating food for his friends and family. For the Buffalo, N.Y., native, that usually means Buffalo wings, beef on weck or his kicked up chili with black beans and ham hock. Here he shares some of his favorite places to dine when he’s not giving food a BAM! at Lagasse’s Stadium.

Where do you enjoy eating when you’re not working at Lagasse’s Stadium?
While not at work, some of my favorite restaurants are Hamada of Japan and Kaizen. When I am in Green Valley, I have to stop at Lucille’s Smokehouse Bar-B-Que.

What dishes are most memorable?
When we go to Hamada of Japan, it is usually with a group of friends to do the Teppan Room table side cooking. For me it has to be the New York Strip and scallop combo, the garlic, soy, sesame and mustard dipping sauce just makes it a great meal. You are also entertained with their skills of making an onion volcano, flipping, slicing and dicing while doing it all extremely quick and precise. The sautéed vegetables and fried rice accompany the dish very well. While there you are throwing back a few shots of sake and trying some great sushi.

Kaizen is right around the corner from where I live. Everything is made fresh to order. They do specials on a daily basis if you are willing to try something different. This is a great way to see their creativity at work, which being a chef is great. Along with sake and beer, you can’t go wrong.

At Lucille’s Smokehouse Bar-B-Que, you start with their baby back ribs, pulled pork, beef brisket and throw in their specialty barbecue sauces. It’s a homerun!! You can choose from more than 12 sides to accompany your entrée. They also do different sampler platters for appetizers, entrees. While sitting in the restaurant you can smell the smoker, what a great aroma!! Then you top it off with their southern sweet tea and live music on Saturday nights.

Why do you enjoy going there?
I enjoy going to Hamada of Japan because I know the food is always going to be great. They have a good selection of food and beverage to appeal to many different people. It’s a fun atmosphere and I’m with friends, which makes it a home run!! To me this is a can’t miss experience.

Kaizen is a great place to eat, kid friendly and it is never a letdown. The food here is always top notch.

I enjoy going to Lucille’s for the great environment and it’s kid friendly, which is big because in my down time from work I want to spend it with my family.
· All Coverage of Lagasse's Stadium [~ELV]
· All Dining Confidentials [~ELV~]
Scott Pajak [Photo: Lagasse's Stadium]