Share All sharing options for: Will Costello, Wine Director at Mandarin Oriental 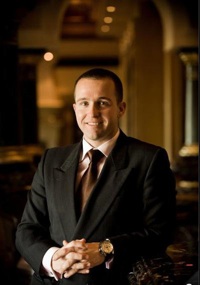 Will Costello just landed in Las Vegas, taking over as the new wine director at Mandarin Oriental. He comes here by way of the Addison Restaurant at the Grand Del Mar in San Diego, where he was the maître d'. Here he shares some of the interesting tidbits about his life, including the most expensive wine he ever sold and a new trend he’s trying to launch at Mandarin Oriental.

1. I have started an industry trend (well, the few people who I can convince jumped on board). I do Bow Tie July. Everyday in July is a bow tie day.

2. I have climbed three of the highest mountains on different continents. Specifically Mt. Kilimanjaro in Tanzania, Mt. Aconcagua in Argentina and Mt. Denali in Alaska. In addition, my dog Roland climbs with me as well each summer and winter up Mt. Whitney. We try to do it in less than eight hours each time.

3. I was once the winner of a TV show on the MTV called Say What! Karaoke. I won the show and earned a trip to the MTV Video Music Awards in New York City. Thankfully I’m the only one with a copy of the video still.

4. I have taken each level of the Court of Master Sommeliers Diploma Exam and hope to finish next year as a Master.

5. The most expensive bottle I have ever sold to a guest left half of it ($12,500 on our list). It was a 1982 Petrus from Pomerol, and he left behind the second half for me to enjoy for a Christmas gift.

6. I was at one point a commercial pilot and wanted to pursue that career path until I realized it was actually a bit boring. I couldn’t sit behind a yoke all day.

7. I love Thai food and can make a mean Panang curry. Not too spicy but enough to get your forehead wet.

8. I used to race motorcycles with CCS Southwest. I even had two races a year at Parumph Raceway. Bike of choice: Suzuki 750 GXSR SRAD.

9. Before becoming the wine director at Mandarin Oriental in Las Vegas I ran a five-star restaurant in San Diego.