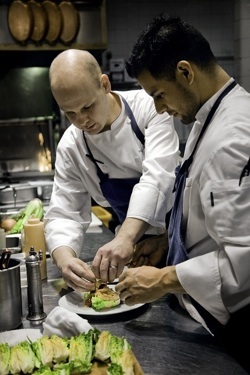 Josh Crain gets set to move over to Michael Mina's American Fish at Aria as executive chef this weekend, leaving behind his days heading up the kitchens at Nobhill Tavern and Seablue at the MGM Grand. He describes himself as an “accidental” Michelin-starred chef, learning the garden-to-table movement growing up in the Midwest. He never intended to become a chef; he took his first jobs in the kitchen to pay the bills. Crain went on to work at the original Bouchon in Yountville, Calif., working his way up. The CIA grad even helped open Dean & DeLuca in St. Helena, Calif., and was a fellow at the Wine Spectator–Greystone restaurant. Here he shares his favorite places to dine in Vegas when he’s not wearing his chef’s whites.

What dishes are most memorable?
At Lindo Michoacan, the margaritas, the closest to Tommy’s Mexican Restaurant in San Francisco and they have our favorite tequila (Chaumucos). Their fried whole fish covered in garlic butter is outstanding. Their menudo is absolutely packed with tripe and their bunelos remind me of my mother-in-laws.

At Ichiza, the jalapeño fried rice has just the right amount of spice and a roasted jalapeño on top. The honey toast, a six-inch high block of brioche, toasted and buttered, filled with ice cream and drizzled with honey should probably be illegal.

At Pho Kim Long, I think like many chefs Asian food becomes a comfort food for us, whether it is the fact that we don’t practice those flavors or what but it always makes us happy. The salt and pepper calamari has the perfect batter, crisp and seasoned well with jalapeño, scallion and fried garlic. The string beans with minced pork is so simple yet the flavors are so big from just salted minced pork and oyster sauce. I feel happy right now just describing it all.

Island Sushi has a great all you can eat offer with good sushi, fresh fish, cold beer and a friendly familial feeling staff. They also serve great Hawaiian plate lunch style food along with the sushi. Eggplant Fries!!!

No one has a better shellfish selection than Bouchon. The salmon tartare is to die for, moules frites and a simple lemon tart. Possibly the fact that I worked for Bouchon in California for nine years might make me a bit biased but I  have enjoyed those dishes for a quarter of my life.

Bread & Butter, run by Chris Herrin, previously the pastry chef at Bouchon Las Vegas, is a phenomenal bakery, one of the most talented all around pastry chefs I have met. The croquet madame made out of sourdough waffles instead of brioche definitely requires a nap within the near future.

In my backyard, anything off of the charcoal grill — ribeyes, lamb chops, corn on the cob, everything tastes great cooked over real charcoal.

At Strip Steak, probably the best steak I have ever had was the American Kobe Ribeye Cap, poached in butter, finished over hardwood grill. Holy crap!!!

By the way, Michael Mina doesn’t do anything that is not good. We have eaten at all the Vegas restaurants and most of the San Francisco ones also — they are all great, and yes, I am biased!

Why do you enjoy going there?
I don’t spend as much time as many people/chefs do going to the “hottest” thing in town or ultra fine dining restaurants but my wife and I find our little haunts that we frequent regularly. For us it is more about a friendly place to go where they begin to recognize you. Someplace that is consistently good at what they do, the price is affordable and where we really “want to go” because it has created memories for us and fills a void. The food is always the main requirement and great beverages are a plus. We usually have a hard time branching out from certain dishes that we really love at each restaurant and since we don’t go everyday there are always the “staples” that we have to have every time.

Lindo Michoacan has great margaritas, great food and one heck of a view at the Horizon Ridge in Henderson location.

Ichiza is a great place to eat late night after work and very affordable.

Pho Kim Long — Whether it is the pho or calamari, it is great every time and also open late night.

I go to Bread and Butter to see a former colleague branch out on his own and be successful is awesome.

In my backyard, it is pretty hard to beat firing up the grill, having a couple of beers and grilling in between floating in the pool.

Maybe I was spoiled by living in Napa Valley for 13 years and being fortunate enough to have eaten at some of the Bay Areas top restaurants and more importantly being able to have eaten at The French Laundry literally 13 times but the older I get the more I seem to turn toward family recipe-type foods — simple preparations, “less is more” mentality or simply a craving for something that has been done for hundreds if not thousands of years that is the perfect food.

A great bowl of pho is something magical, steamed mussels remind me of my short time in France. Drinking a Pilsner Urquell reminds me of Prague. Much of it for myself and my wife and family is about the memories and stories. Dinner is a great story time, when you can have dinner and you are at the table for more than 20 minutes you are on the right path.?

Too many times we eat out of necessity, but if we can slow down, make the time worthwhile whether it is with family or friends and make it something special then it will be exactly that and the next time you sit down to eat and have that dish again it will remind you of good times.
· All Coverage of Josh Crain [~ELV~]
· All Coverage of American Fish [~ELV~]
· All Dining Confidentials [~ELV~]
Josh Crain [Photo: Michael Mina Group]