Pierre Gagnaire Will Be in the House at Twist

Share All sharing options for: Pierre Gagnaire Will Be in the House at Twist 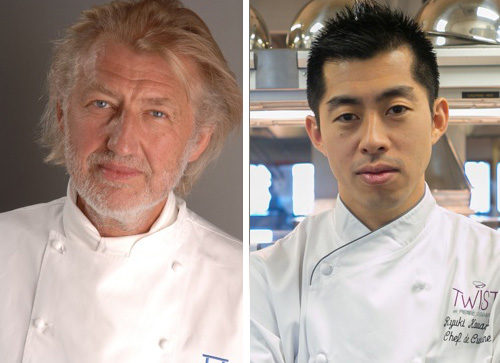 Twist by Pierre Gagnaire shut down temporarily through Aug. 13 for its usual summer holiday, but fear not. The restaurant at Mandarin Oriental is just prepping for a visit from Pierre Gagnaire himself Aug. 27 through Sept. 6.

While the three-star Michelin chef is in town, he plans to celebrate the appointment of Ryuki Kawasaki to chef de cuisine for Twist by Pierre Gagnaire.

Together, they will prepare a menu featuring the cuisine of three international cities that have had an impact on their culinary repertoire. Look for influences from Paris, the location of chef Gagnaire’s flagship restaurant Pierre on Rue de Balzac; Tokyo, the city of chef Kawasaki’s heritage and training at a Michelin three-star restaurant; and London, where chef Gagnaire hired Kawasaki at Sketch, his Michelin one-star restaurant.

“When I first stepped into chef Gagnaire’s kitchen at Sketch restaurant in London, I had to re-think my classical French repertoire from previous restaurants,” Kawasaki says. “Working under chef Gagnaire’s tutelage, I have learned to bring greater creativity and emotion into the artful dishes that we prepare for the enjoyment of our guests. That passion inspires me every day.”