Share All sharing options for: View Wine Bar & Kitchen Gets Cheesy in September 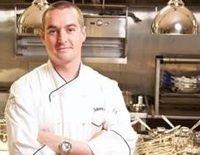 One of Market LV’s 20 anticipated tenants plans to start opening in stages beginning in September. View Wine Bar & Kitchen plans to have a cheese shop as well as a restaurant.

Former Planet Hollywood Resort president Bill Feather is behind the concept, which will be on the second floor of Market LV in Tivoli Village. He tapped Johnny Church —  who worked as the executive chef of Michael Mina’s XIV in Los Angeles and just left his gig as a chef for Gordon Ramsay’s Kitchen Nightmares — to be the executive chef.

First to open, the cheese shop, which plans to serve up sandwiches, salads and vegetables from 10 a.m. to 10 p.m. Then the restaurant — which plans to offer seasonal dishes, wines and artisanal beers from 11 a.m. to 1 a.m. — will open. Live piano music will play nightly.
· All Coverage of Market LV [~ELV~]