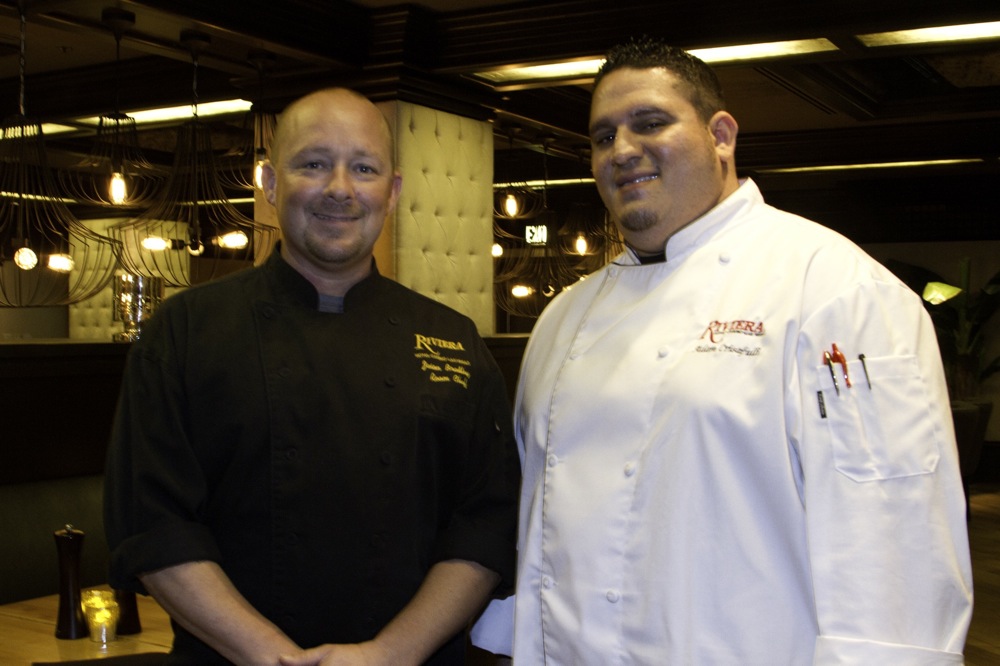 Ever since the Riviera filed for Chapter 11 bankruptcy protection in 2010, the new owners have been trying to revive the struggling resort. One of those changes came when Christopher's renovated to become R Steak & Seafood. Chef Jason Bradley and Riviera executive chef Adam Crisafulli sat down with Eater Vegas to talk about the first year at the restaurant.

How did R Steak & Seafood come together?
JB: Well the previous restaurant was Christopher's. They let their guard down. The Riviera went through a bankruptcy and the new owners took hold. We made some tweaks to the menu. We brought in nicer cuts of meats instead of going for the budget cuts. It was more about bringing it up to what the Riviera name used to represent.

What changes did you have to make to the space?
JB: We did a full renovation. They did change out everything. Before it was more of a cafe with wicker furniture and pink linens. It looked like the '80s threw up in there. We updated it a lot with butcher block tables and the orange glow of the lights.

What did you learn?
JB: I was real hesitant about coming to an old union hotel. The employees have been here for so long. But the crew here is wonderful. I learned that maybe I shouldn't have preconceived notions. That's a big part staffing.

I've been involved with a lot of openings with restaurants, but this was the first one I did firsthand. I was able to do it and I was happy I could. I was always a part of them but I never had control.

What was the menu testing process like?
JB: That's one of the best parts. When you decide on a steak — what kind, how long aged — you get to try all that stuff. It's a good weight-gaining process. We're not catering to the Bellagio crowd, we're catering to the Riviera crowd.

Do you get a lot of locals in?
JB: That's one of the things we're trying to get in. We're trying to reach out to them. It's really easy to get here and it's reasonable.

Then there's the nostalgia part of it. They've served everybody here. I have a cook who's been a cook here for 43 years, longer than I've been alive. He has some incredible stories and things he's seen. The nostalgia's there. People kind of forgot about the Riviera with the bankruptcy.

Six months in, what changed?
JB: It was just a matter of fine tuning. When you do a restaurant, you put out dishes and we changed some of them. When there is a change that needs to be made, we can make it quickly.

Does it seem like it's been a year?
JB: Actually, it's gone by really fast. It's really easy to come to work when you like what you do. I've got a great staff. I got a great menu. It's the Riviera. It's old Vegas. Time goes fast when you love what you do.

What's the must-order dish of the moment?
AC: I would definitely say the ribeye and the scallops. The scallops appetizer is out of this world.

JB: For the appetizers, our scallops are fantastic. Three jumbo scallops with a miso paste and a nice sear. It's simple and light, and the flavors and freshness comes through. It's a subtle dish but nice.

What's in store for the future?
AC: Restoring the Riviera back to its glory. This hotel is one of the most photographed hotels in Vegas. I guess over the years the quality of food has declined. That's why I'm here. Those are a lot of great goals for the hotel and myself. The way Vegas is, one day you can be on the chopping block for something and the next day, hey you have to try this.

JB: Extending our bar menu and our hours of the happy hour. It's getting more popular and at $5, you can't find that anywhere.

We are reworking our menu. Steaks are steak, but we brought in some new vendors and we're finding some really good things.

We do have a new executive chef (Crisafulli) with a fine dining Italian background. I'm sure a flair of that will be in there somewhere.