Norman Ly on Last-Minute Shopping to Get in 1OAK

Share All sharing options for: Norman Ly on Last-Minute Shopping to Get in 1OAK 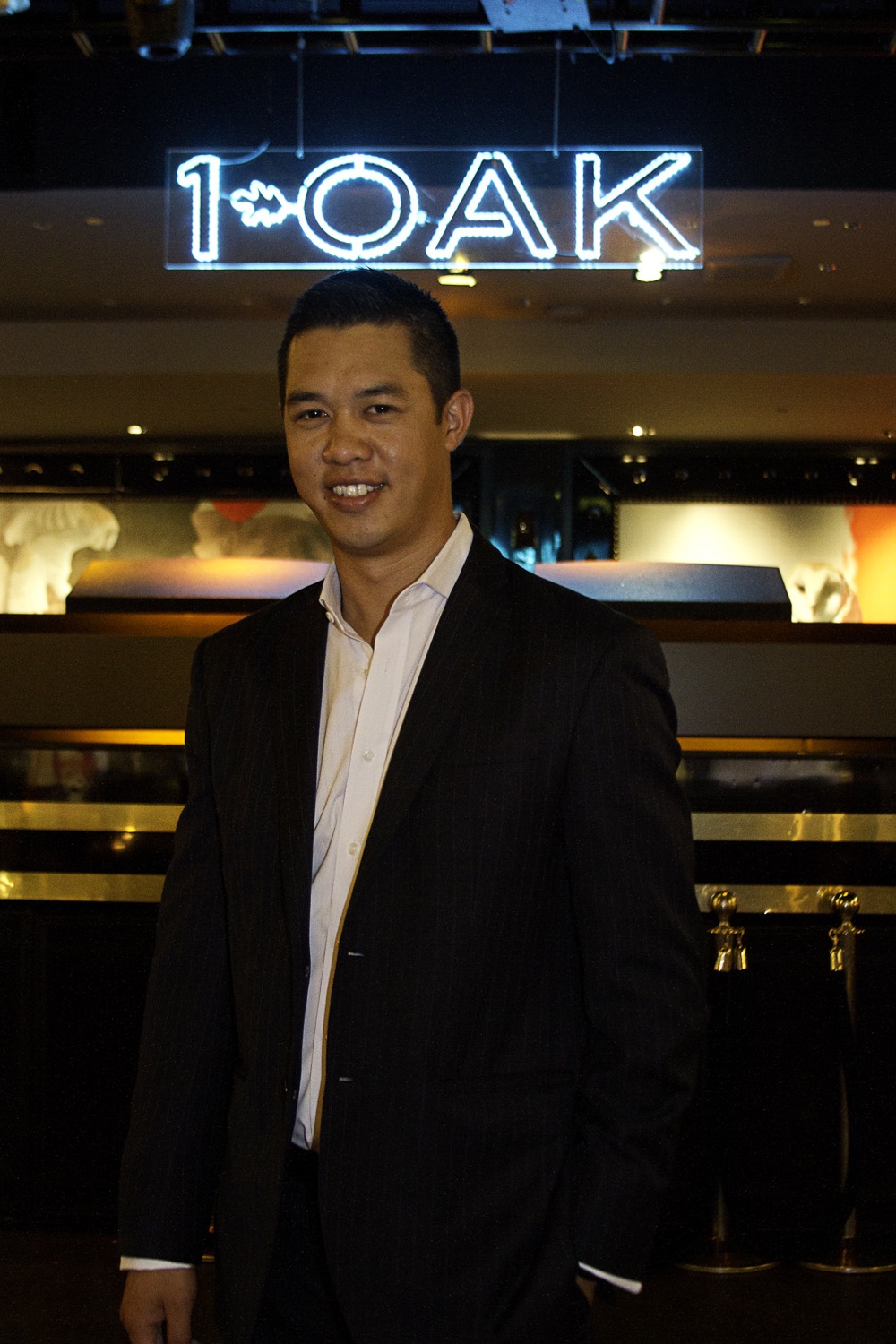 Norman Ly is the director of customer development for 1OAK Nightclub at the Mirage and has been in the hospitality game since the Desert Inn days. Eater Vegas gets this industry vet's take on everything you need to know to know from crazy high roller antics and last-minute shopping sprees to meet dress code criteria to how to get in on this busy holiday weekend.

How'd you get into the biz?
When I was 17 years old I was fortunate enough to fall into a bell captain position at the Desert Inn, which is now he Wynn and Encore. To my understanding, I believe I was the youngest bell captain to work a major resort and casino on the Strip at that time. Through that, I was taking care of a majority of VIP high rollers [at the] Desert Inn had with transportation, shows, dinner reservations, and nightclubs during their stay. I also knew a lot of people in the nightclub biz as well from working at the D.I. and growing up in Las Vegas. During my employment, Steve Wynn purchased the resort and casino and closed it to build the Wynn and Encore.

I left to work similar positions at the Rio and realized I had a demand from all the people that I had met and from the referral's that came with it and people I knew in the hotel and casino, hospitality and entertainment industry, so I came up with the idea of starting a private VIP Services and Concierge business. I then met Chicago native Marc Kmetz. Marc worked several of nightclubs in Chicago and did some private security detail with several celebrities and jet setters. Together we started a full service VIP hosting and private security company called Vegas Group. I ended up leaving the Rio to pursue the business we created. At that time we were maybe one of three companies that had the similar concept of this business in Las Vegas. Keep in mind nightclubs at that time were not easy to get into unless you knew someone that ran the club or a high ranked host. With this collaboration and the industry contacts we had our idea became a success. What we did had influenced many people to turn the idea into a career, from that many companies turned up and till this day it's still in operation. The title "independent host" evolved from this. There are now hundreds of companies and people that do independent hosting in Las Vegas and all over the world, some of which we at The Light Group are in business with today.

After several of years I decided to move on to something new and sunk my teeth into the corporate finance world, moved to Scottsdale, Ariz., and became the director of global relations for a well known Canadian raw land investment company. This was one of the best decisions I have ever made. I was able to extend my network to corporate companies and executives from all over U.S., Canada, Europe and Asia through my position at Walton.

After two years of working and living in Arizona, I realized my work in Las Vegas was not over yet so I decided to make my move back where it all started to continue my career in Nightlife and Entertainment. I then joined The Light Group and began my career by working at The Bank Nightclub inside the Bellagio and recently opened our newest venture 1OAK Nightclub at the Mirage in January.

What's the most extravagant experience you can craft?
One of our VIPs wanted us to throw him the ultimate birthday party. When our client walked in he was greeted by a huge mariachi band, which was blasting on every speaker in 1OAK. Once the band stopped, we blindfolded the guest and dressed him as Superman then escorted him in to his table. We then took off the blindfold and he was greeted by the entire 1OAK staff with sparklers and blinking light sticks. Bruce Buffer was on the microphone welcoming him to the club. Four large security guards carried him as if he was flying through the crowds to his table. To top it all off, we had one of his favorite singers hired to sing "Happy Birthday" and perform at 1OAK.

Detail is a big thing for us, so everything we did that night we had to make sure was perfect. We knew what his interests were, including flavor and decor of cake to having our staff dress in his favorite color (green). We had big picture cut outs of his and his closest friends' faces and personalized 1OAK hats with their last names stitched into them.

How many people really drop $100,000 in a night?
To be honest, there are few people that do this often. but it does happen more often then people think. Since we at 1OAK opened doors we've been fortunate to have a good number of these nights.

What's it going to take to get in at 1 a.m. Saturday of Labor Day weekend?
For our table customers we offer a pre-payment method for big weekends like Labor Day weekend. If you have a prepaid table, we will hold your table till 2 a.m. If you're just wanting to get in, I suggest bringing a female or two for every male in the group, dress to impress and contact a 1OAK host prior to coming. If you don't have a contact, speak to the Concierge desk at the hotel your staying at and they can put you in contact with one of us.

What is the craziest thing you have seen a guy or group of guys do to get in?
When I was at The Bank, a group of guys from London walked up, didn't have a Light Group contact and they looked as if they just came straight from a pool party. They wanted to come in and purchase a table but due to our strict dress code policy, I couldn't accommodate unless they changed into proper dress attire. Instead of going back to their hotel to change they walked over to the Bellagio designer shops and headed straight into the Gucci and Giorgio Armani store. Forty minutes and $15,000 later they came back dressed to the nines with the designer shopping bags in hand with what they just bought and had on in them. They said to me, "Can we get in now? And do you have a safe place to put our bags?" I replied yes twice and let's just say they had one of those jetsetter nights at our club. Till this day I remain in contact with them.

What about girls?
Um.. I would like to plead the fifth. [Laughter]

Do you go out?
Absolutely! I find myself going out at least two to three nights a week sometimes more depending on who's in town or what's going on in town. It's important to go out. Every time I do I end up meeting a potential future client. Las Vegas is one of those cities where you have friends and guests frequently visiting so when they do, you have to take them out to see the city and have a good time.

What should you always bring?
You should always bring a female or two. We like to have a good even number of male to female ratio for every group.

What would you say is your best day?
It's hard to say, it varies on what events we have, what's going on in town etc. sometimes Friday, sometimes Saturday, sometimes Tuesday. We have had so many great events we produced on each day we have opened that at times it feels everyday's the best.

Would you say you guys are locals friendly?
One thousand percent absolutely! Between our three nightclub venues, we have three nights a week catered to locals and industry friends. 1OAK on Tuesdays, Haze on Thursdays and The Bank on Sundays. We have created many local-driven events on these Local Industry Nights and continue to create new ideas to keep things fresh. We just recently had our first "Nightlife Olympics Event" at 1OAK. We had nightclubs from all over Vegas pair up in teams to participate in this for a grand prize of $5,000 cash. We had beer pong, glow baton archery, cornhole and a few other games we came up with for these teams to compete in. This was all done during normal hours of operations on our Local Industry Night Tuesday and was a big success! We will now have this event annually at 1OAK.