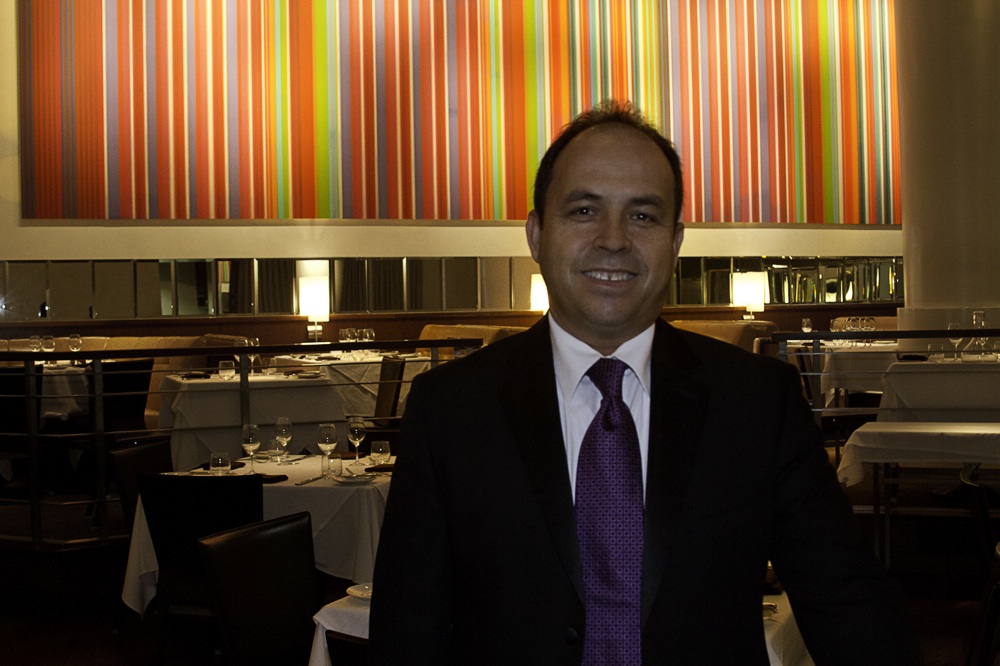 Carlos Perez started working for Wolfgang Puck 25 years ago at Spago in West Hollywood. "When Wolfgang was cooking, I used to bring the food with him to the table," Perez says. "All the movie stars were there. When the rain water this high, the movie stars would have their feet on the chairs still eating."

Five years later, Puck ushered in a new era of celebrity chefs in Vegas when he opened Spago at the Forum Shops at Caesars and Perez followed. "When we moved to Vegas, my wife cried. 'I don't want to go to Vegas.' Now she loves Vegas. You can't win."

Here he shares some of the memories of working with Wolfgang Puck, how to get a table there on a busy night and the celebrities who line the tables.

What's it like to work with Wolfgang Puck?
That's what I learned from him, to love people so they feel it. That's pretty much what I've been doing here for 20 years. I have people coming here three times a week. I learned all this from Wolfgang, to be humble and all.

Wolfgang was here for a meeting with these big guys. He wanted an espresso, so he made his own espresso. And then later he wanted to eat something. He threw some pasta in the water, a little garlic, tomato sauce and a piece of bread.

That's what I love and what people love.

So, what's the busiest time right now?
Pretty much when we have a show. Lunch for us is big. We get all locals, about 90 percent locals and I know they're locals because I know every single one. It means a lot. At nighttime, we're busy during conventions and the show. It helps big time. Having Celine here is the best thing. I tell [Celine's husband] René [Angélil] that all the time. She's the one who brings more high rollers than anyone.

As one of the hottest restaurants in Las Vegas, you've surely been offered gifts or cash in exchange for reservations or a table. What have people tried?
This is a good question. Ten years ago, people used to do that. Vegas changed. I don't take their money. If the guest wants to give you something when they leave, they had a great time, then you can take it.

How about celebrities?
I like Celine. She used to be here with her kid playing with him in a banquet room three or four years ago.

Bill Clinton is one of the nicest persons I ever met. He came here a lot when he was president.

Oscar [Goodman], the [former] mayor. He's another one who's nice and very friendly.

How do you deal with VIPs when there are no tables to give?
What I used to do and if I need to do it now, I always take them to the back door. The VIPS would come in. It used to be a two- or three-hour wait. I would tell them to go to the back door and then a table would open. We would seat them and bring them menus.

Everybody is VIP everyone who walks in the door. Here I don't hold a table for anyone.

So, what's the strangest request that you've accommodated at Spago?
That they want something from another restaurant. I've done it. I still do it. They want a different steak that's not on the menu. I would go behind the chefs and go get it. I still do it. I used to fight with the chef and tell him, "You can fire me any day you want."

Wolfgang used to have Chinois here down the hall. We had one guest who would come from the M.A.G.I.C. convention and want some catfish. We don't have it. So I would have to go there. "I want some sushi from Chinois." I would go get it.

If I have to go to the market to buy something, I will go. I always tell the chefs.

Do you ever get any requests for vegetarian dishes here at Spago? How do you accommodate them?
We get a lot.

We don't have a vegetarian menu. Chef comes to the table and walks through the menu with the guests.

What's the most popular dish right now?
If you go to the lunch menu, the smoked salmon with black caviar. It's been on the menu since Wolfgang started Spago 30 years ago. If we don't have it, people leave.

If you come in for dinner, the short ribs. People love it. People come from New York to order it.

So, when you're not at Spago, where are you eating these days?
I eat at home. Once in a while I try all the restaurants we have to see what they're doing. Sometimes I try restaurants in the casino. I go to Rao's.

What's the must-order dish at Spago?
The duck breast. People love it.

Were there any reviews that led to significant bump in service, or a change to the type of clientele?
If you go back 20 years, Wolfgang was the first chef to come to Vegas. I would say what turned it around was the great food that he brought to Vegas.

At the end of the day, what's the one Gatekeeper tool you need to get the job done?
The last thing I would say to get you through day is to make sure your staff has great knowledge.

One day I want to write a book about everything that happened in 20 years. Some days, I was ready to leave. There were too many problems, it was too busy. When I'm sitting down right now, it brings it all back I do it here.

It used to be a four-hour wait. We used to close the doors. We had 1,700 covers. The kitchen couldn't keep up.