20 Iconic Vegas Dining Rooms To See Before You Die

Share All sharing options for: 20 Iconic Vegas Dining Rooms To See Before You Die

Heavy hitting designers have made the dining rooms in restaurants some of the must-see environs of Las Vegas. Here, a look at 20 restaurants that should be on your list of places to see even if you don't sit down for a meal.

American Fish
Michael Mina's ode to a 19th-century lodge at Aria features a nod to turn-of-the-century craftsmanship and traditional woodworking methods combined with artisan cast glass and woven copper mesh. Lining the bar, oversized, glass panels embedded with laser-cut images of birch trees in amber. The bar in the lounge is reminiscent of a slow-moving stream while the walls are lined with sepia-toned postcard images and hand-blown glass pendants and the floor is made of end-cut recovered oak. In the dining room find leather Pullman-style booths with plain-sawn tables. 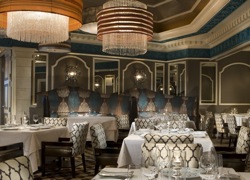 Andre's Restaurant & Lounge
Andre Rochat's French restaurant at the Monte Carlo goes with a twist to the traditional French blue with turquoise set against pearly white and gray walls throughout the restaurant and complemented by colorful contemporary artwork. 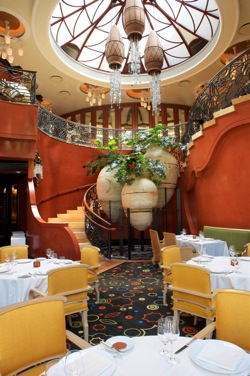 Bartolotta Ristorante di Mare
The bi-level restaurant created by Roger Thomas, the executive vice president of Wynn Design and Development, recalls an Italian seaside. Some of the sumptuous details include pseudo-Baroque chandeliers described by Thomas as "a crazy pour of crystal," enormous earthenware urns, some 400 years old, suspended from the ceilings and coils of hemp rope that accent the ceiling. 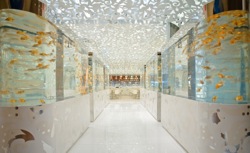 Beijing Noodle No. 9
Inside this casual Northern Chinese restaurant at Caesars Palace sits two enormous aquariums that hold hundreds of goldfish at the entrance. Inside, a modern metropolitan design set off by contemporary cafe-style furniture and floral finishes on a white-on-white palette. 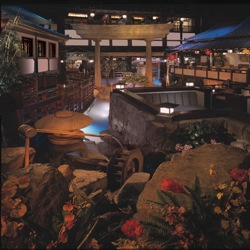 Benihana
Yes, Benihana is a chain but this one at LVH is the largest in North America, frequented by Michael Jackson when he was in Vegas. The space features lush Japanese gardens, flowing ponds and an authentic Torri Arch in addition to private teppanaki rooms where chefs show off their flair. 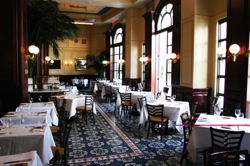 Bouchon
Settle into the soaring confines of a Parisian bistro at Bouchon in the Venezia Tower of the Venetian. Chef Thomas Keller selected designer Adam D. Tihany to recreate the original Bouchon's vibrant environment only in blue in Vegas. The restaurant features a classic mosaic floor, a magnificent pewter bar that only wears with stories as it ages, antique light fixtures and hand-painted murals by French artist Paulin Paris throughout. Find additions to the menu hand-written on blackboards throughout the restaurant. 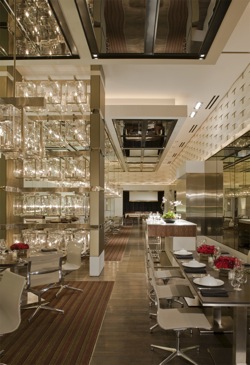 Cut
Las Vegas-based firm Avery Brooks & Associates is behind the 160-seat restaurant and 60-seat bar and lounge at Wolfgang Puck's Cut at the Palazzo. The modern space features a basket woven felt wall high above bronzed mirror walls and acid-etched glass. On the floor, white limestone, walnut wood tiles and custom-designed carpeting. Custom-designed lighting fixtures give the feel of lamplight while leather seating and leather table tops framed in brushed metal offer a contrast to the English Windsor wood slab tables that occupy the center of the space. 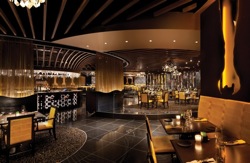 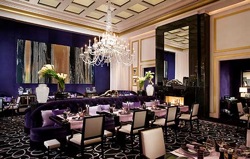 Joel Robuchon
Pierre-Yves Rochon designed The Mansion to look like Paris in the 1930s. A black-and-white tiled foyer lit by a crystal teardrop chandelier greets guests as they enter. To the left, a small bar area. In the tiny dining room that seats 42, soaring 17-foot ceilings set the stage for the black and purple room with spots of turquoise, all decadent, decadent, decadent. To the right of the dining room, an ivy-covered patio that serves as a secondary dining room.

L'Atelier de Joël Robuchon
Chef of the Century Joel Robuchon opened this more casual concept from designer Pierre-Yves Rochon in 2005 at the MGM Grand. Inside, the boundary between kitchen and dining room are crossed as guests watch their meals created in front of their eyes. 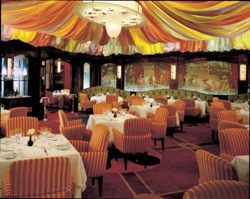 Le Cirque
Designer Adam D. Tihany created this ode to a circus tent at the Bellagio with a mahogany interior and decadent furniture to complement the big top above. 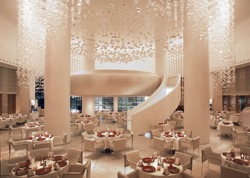 miX
The sexy decor of Alain Ducasse's all-white mIX in Mandalay Bay features a custom-designed, 24-foot chandelier of 15,000 hand-blown glass spheres made in Murano, Italy, suspended from the ceiling in a 43-foot diameter circle that dares to touch the floor. 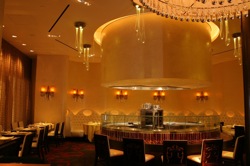 Payard Pâtisserie and Bistro
This Parisian cafe from Francois Payard at Caesars Palace sits in the round with the kitchen in the center so all eyes can watch the dishes being made. The soft white banquettes, artsy wall sconces and teardrop lighting installations hanging from the ceilings are set off by soft lights in the golden room that make this a romantic setting. 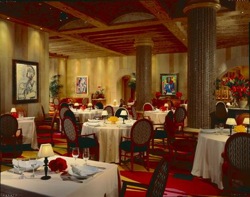 Picasso
Dine among the works of Pablo Picasso at his namesake restaurant at the Bellagio. Original pieces of the master's art and pottery decorate the space. In addition, 16 tables sit on the patio for a remarkable view of the Fountains at Bellagio. 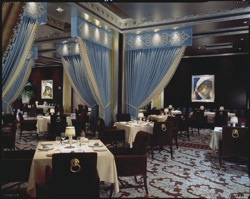 Prime
This jewel box of a restaurant from Jean-Georges Vongerichten at the Bellagio is decked out in plush velvet draping and powder blue marble floors, an ode to Tiffany & Co. The scene evokes a 1930s speakeasy chop house. On the walls, three commissioned paintings by Carlo Maria Mariani, George Deem and Michael Gregory, as well as a water-themed canvas screen created by Joseph Raffael. 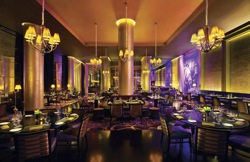 Sage
Designer Jacques Garcia created an opulent French boudoir for Shawn McClain's culinary delights. Inside find hand-painted murals by Paulin Pâris that reinterpret early modernist paintings such as Manet's "The Lunch on the Grass" on the walls around the mirror in the bar, and Renoir's "Luncheon of the Boating Party" overlooking the main dining room. Muted gold on the pillars and tiled walls keep the light low as it reflects off mirrored panels. Plum drapes, walls and furniture bedeck the space with stained wood flooring. Above, find pendant lights and stainless-steel chandeliers as well as floor-to-ceiling wine towers. 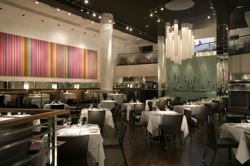 Spago
Wolfgang Puck introduced the celebrity chef concept to Vegas 20 years ago when he brought Spago to the Forum Shops at Caesars. Engstrom Design Group out of Northern California remodeled the restaurant to create a rich, contemporary setting filled with art. A palette of white plaster, quartz stone and Corian and chocolate brown creates the setting for pieces by Tim Bavington, David Ryan and Eric Engstrom. Booths and chairs fashioned from creamy leather are set off by dark walnut floors, zebra wood paneling and hand rails of stainless steel and frosted glass to make a gallery-like setting. 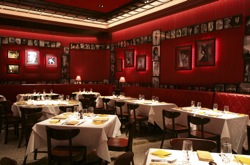 Strip House
David Rockwell designed the seductive Strip House at Planet Hollywood Resort as a double entendre that refers to the restaurant's signature cut of steak and to the series Studio Manasse black and white nudes from the 1900s that pepper that space. Old-world glamour comes alive in this siren red space that boasts 763 photos throughout. 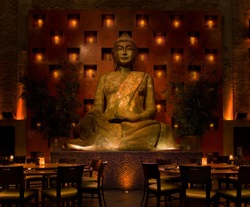 Tao Asian Bistro
Celebrities flock to Tao Asian Bistro at the Venetian, and the decor inside only adds to the experience. Designer Thomas Schoos created an authentic Asian restaurant decked out in lush velvets and silks, waterfalls and century-old woods and stones. An extensive collection of Buddha statues watches over every corner of Tao, including a unique reclining Buddha and Tao's signature 20-foot Buddha that "floats" peacefully above an infinity pool complete with Japanese koi. Other decadent touches include a red neon entrance that nods its head to the red gates used to mark the entrances of Buddhist and Shinto temples, bathtubs filled with rose petals, a Zen garden complete with a raked rock pattern and boulder accents and antique Asian opium pipes. 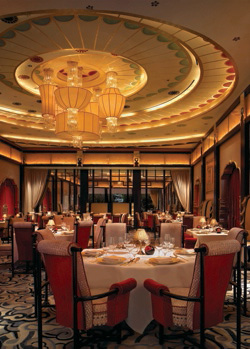 Wing Lei
This Chinese restaurant at Wynn Las Vegas features a dramatic interior design influenced by early French-influenced Shanghai. Chinoiserie decks out the entire space. Designer Jacques Garcia created the white onyx bar that greets guests as they enter. Throughout the main dining room and private rooms, numerous ancient Chinese motifs such as the dragon and flaming pearl are visible. The ceiling her features whorls and circles in lavender, deep blue, gold, celadon green and more. Outside the restaurant, 100-year-old pomegranate trees line one entire wall of the dining room.