The First Year at The Barrymore, the Retro Classic

Share All sharing options for: The First Year at The Barrymore, the Retro Classic 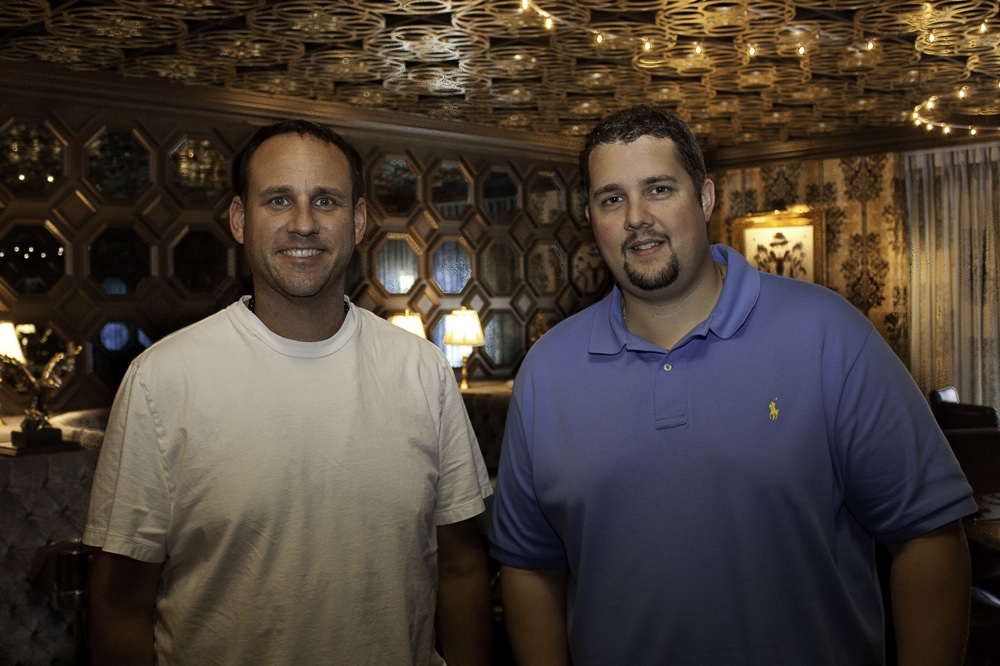 Back in the old days, Vegas resorts used to have three kinds of restaurants — a coffee shop, maybe a buffet and the gourmet room, where people would get dressed up to dine out. The Monte Carlo and Portofino at Desert Inn, the Gourmet Room at the Tropicana and William B's at the Stardust were just some that held court in a bygone era of Las Vegas. Barrymore's at the original MGM Grand, where Bally's Las Vegas sits now and named for actor John Barrymore, formed the inspiration for The Barrymore, the restaurant from Block 16 Hospitality at the Royal Resort. The end of the bar features the logo from the original, and while phones usually appeared in every booth at gourmet rooms, Billy Richardson and his chef and partner Anthony Meidenbauer went with lamps in the booths instead of patching calls through. Here, they share their thoughts on the first year at The Barrymore.

How did The Barrymore come together?
BR: They were redoing the property and redoing the lobby. [They] wanted a restaurant to go in. They knew what we did. There used to be a restaurant in there called Cosmo's Cafe Ristorante. The room was weird. There was an office in the front. They gave us a blank canvas to come in and redo it with our vision.

You don't have to walk through a big casino and you can get your car whenever you want.

What changes did you have to make to the space?
AM: The bar was relocated. Basically the whole front was gutted and relaid out.

BR: The patio wasn't there. We rebuilt it with a fireplace. The kitchen stayed the same.

AM: We like the idea of having two parlors. It almost feels like you're in two separate spaces. Locals really like the back room, especially the back two booths where you can watch people.

What did you learn?
BR: We learned that breakfast and lunch doesn't work. Lunch in Las Vegas doesn't work. Since a lot of our clientele is locals, summertime is different than other times. We're not in a big building. There's not a big influx of people coming in every two days. It's becoming a word of mouth. The wine list is way different with 50 bottles under $50.

The staff knows the regulars. It's cooling down so we can open our patio up.

What was the menu testing process like?
AM: Initially, I had ideas. I have a chef de cuisine. It starts off with Billy and I talking about ideas. I knew opening up in September we would have a fall menu. Everything had a classic throwback feel.

The great part is that I had other kitchens to work out of. We had plenty of time. Most places don't have that luxury. So we had three completely different menus. We had a tasting last week for the fall menu. We start with a list of the seasonal ingredients. All of our menus start with talking.

BR: It's a team atmosphere. I think it's great the chefs get involved. We have a general manager and an assistant general manager here, and if they don't like it, it's not for my menu. They have to sell it.

Have the guests embraced the restaurant?
BR: Oh, yeah, a lot.

AM: You get people coming back and they're a little sad when they see a menu change. They hang out at the the bar. We have a cool lounge and patio where you can smoke a cigar.

BR: It's a casual enough restaurant where you can bring guests in from out of town. We wanted it to be a place where people could come twice a week and not bust your wallet.

AM: The big part with the food is you can pronounce everything. I refrain from using the foodie menu. I don't want to think when I go out.

Six months in, what changed?
AM: We rolled into the summer menu. The menu got a lot lighter and the restaurant had just closed lunch. We didn't get a lot of kickback from it.

Does it seem like it's been a year?
BR: No

AM: No. The other days someone told me Pink's had been open for three years.

BR: Public House is going to be a year on New Year's Eve.

The good thing about it we enjoy what we do. I do get a little crazy and he has to calm me down. Everyone asks me what my favorite restaurant is and it's this one.

What's in store for the future?
BR: Pink's at Red Rock. We're thinking about doing one at Green Valley Ranch. so you have one on both sides of town.

On Monday, we're working on a new concept couple years with other people open a year from March. I invested in a bar in downtown, the Commonwealth.

We're looking to expand out of state. Maybe a place in New Jersey. We have a lot of things in the works.

AM: After we opened Public House the game plan was to take two months off before making more changes. Then we had to take over Gallery Nightclub.
· All Coverage of The Barrymore [~ELV~]
· All Coverage of One Year In [~ELV~]