Share All sharing options for: Max Solano on Secret Whiskey Menus at Delmonico 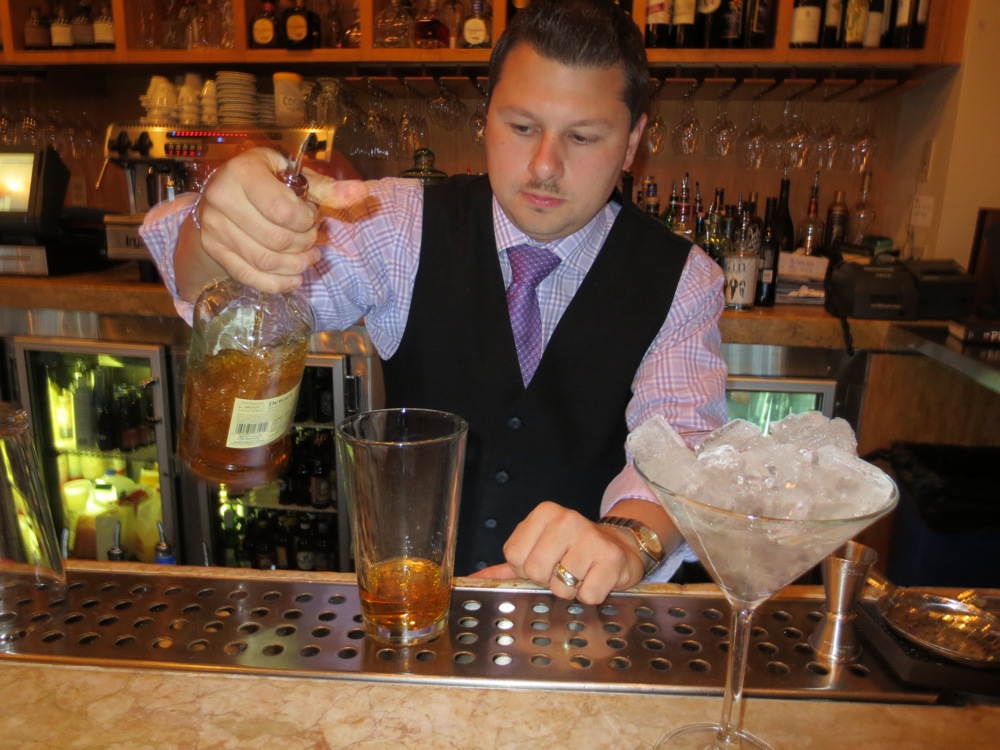 If you've never headed over to Delmonico Steakhouse at the Venetian to try the secret whiskey menu, make it a must on your agenda. Mixologist and beverage manager Max Solano has a secret book of whiskey concoctions, only available when he's behind the bar. None of the other bartenders even know what's on the special menu. Aside from more than 500 whiskeys on the menu, including just about every variation of Pappy's imaginable, look for drinks such as the Blanc Stare made with High West Silver Whiskey, Lillet Blanc with absinthe and violet ice or the popular Crimson Cocktail with Dewars 12, Grand Marnier, pomegranate, grenadine, pineapple juice and egg whites.

Solano came to Emeril Lagasse's Delmonico four years ago after working at Table 10 and handling the cocktail program at both restaurants until last June. But he really got into mixology at Emeril's in Orlando. "They really liked what I was doing with their program there. I wanted to stake a claim in setting up their first mixology program."

Here, he shares what it's like at Delmonico, the strange requests he gets and how he handles them.

So, what's the busiest time right now?
It comes in pockets. Normally the convention season runs January through late May, then September, October and November are super busy. December it slows down. The slowest months are July and August, with sporadic weeks here and there.

With all the new restaurants opening up, we're still consistent with 600 to 700 covers on a Friday and Saturday.

As one of the hottest restaurants in Las Vegas, you've surely been offered gifts or cash in exchange for reservations or a table. What have people tried?
I have not. I'm totally lying. Yes, I have.

I've never accepted it though.

I'm happy to help when I can, even from the position behind the bar. We get so many regulars here. It doesn't matter if it's the first time or the 100th time, we'll find a way to get them in. We're just grateful to have them.

The most was $200. That happened not too long ago. I don't like to tell my guys. They're like, "Why didn't you take it?" I didn't do anything for it anyway.

Tell us about your favorite customers.
Whiskey drinkers. Not just whiskey drinkers, but people who are open to be educated. My part of the dining experience is to introduce new things, new produce, new techniques. Those are little things that will stand out in your mind. Nobody else or few other places are dong that.

Also those individuals who are into craft cocktails.

We also appreciate guests who spread the good word about what they do and bring other people. It's the word of mouth.

So, what's the strangest request that you've accommodated at Delmonico?
If I have any stash. If I have any drugs people looking to score. My reaction is twofold. It's kind of insulting. Do I come off as a drug dealer or someone who does drugs? The other is funny. It's rude. It happens every so often. No I definitely do not accommodate.

People from time to time ask for opinions for a strip club or related to that but I never go into details. I don't normally go to those places.

What was the first thing that shocked you in Las Vegas?
I have pretty thick skin. I've been to Vegas enough times that I feel like I've seen enough things.

So, when you're not at Delmonico, where are you eating these days?
A lot of locations. Garfields, Marche Bacchus, Lotus of Siam. I spend a lot of time at Ichiza and Raku.
· All Coverage of Delmonico Steakhouse [~ELV~]
· All Coverage of The Gatekeepers [~ELV~]