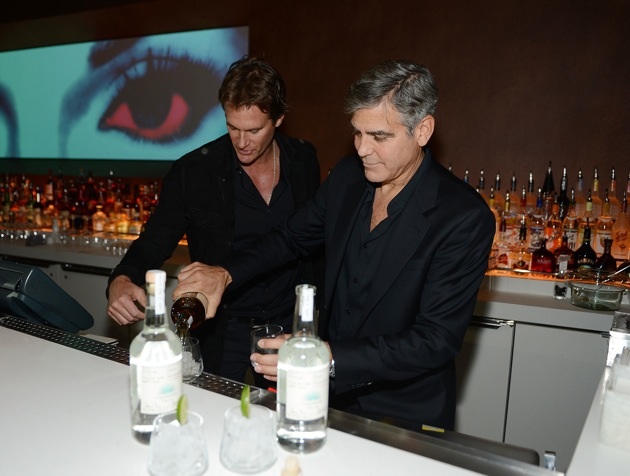 Singer Bruno Mars was spotted with a party of four dining at Lupo by Wolfgang Puck at Mandalay Bay on Saturday night. He ordered calamari fritti, short ribs and ravioli. [EaterWire]

Miami Dolphins stars Jake Long, Richie Incognito and Will Yeatman dined at Social House at Crystals on Saturday night. The group arrived at 4 p.m. and sat in the lounge where they could catch a glimpse of the NFL playoff game. The three ordered miso soup, sushi, specialty rolls and the A5 Wagyu as well as dirty martinis. [EaterWire]

Dancing with the Stars host Brooke Burke-Charvet dined at Fix at the Bellagio on Saturday night. She sipped a Grey Goose martini and ate sashimi, lobster tacos and Caesar's salad. [EaterWire]

Tim Tebow was spotted at Tao Asian Bistro at the Venetian on Thursday night after unveiling his new line of headphones with Soul Electronics at CES earlier in the day. The New York Jets quarterback was joined by his brother Robby for dinner with Soul Electronics CEO Lan Kennedy. They dined next to Ludacris, who was joined by a large group that included The Cosby Show star Keisha Knight Pulliam. [EaterWire]

Clooney also stopped in Wolfgang Puck's Bar & Grill at the MGM Grand on Wednesday night for late-night drinks at the bar. [EaterWire]

NFL Hall of Famer Jerry Rice was spotted at Lavo at the Palazzo on Wednesday night. Also at the restaurant, singer and America's Got Talent host Nick Cannon with a large group on Tuesday nigh. The table ordered specialty cocktails and signature favorites, along with a 32-ounce Tomahawk ribeye special. Cannon said hello to MC Hammer, who was dining with friends at a table nearby. [EaterWire]
· All Coverage of Star Watch [~ELV~]