Share All sharing options for: Ronnie Rainwater Goes Old School on Nights Off 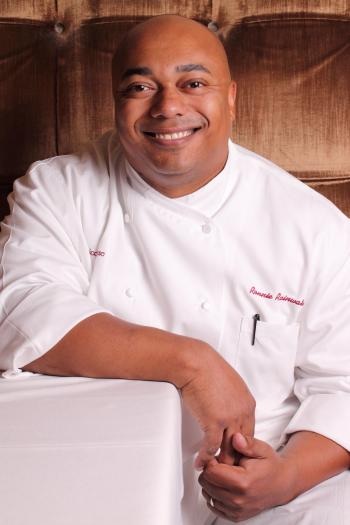 Ronnie Rainwater was born and raised in Southern California outside of Los Angeles. He grew up in the kitchen, shadowing his Southern grandmother at the stove. One of his first jobs after graduating from Western Culinary Institute in Portland, Ore., was an internship in the kitchen at The Playboy Mansion in Beverly Hills, where he helped prepare dinners and private events for guests. In 1999, Rainwater became a cook at Emeril Lagasse's Delmonico Steakhouse at the Venetian and moved to Las Vegas. In 2007, he was promoted to executive sous chef at the restaurant, the chef de cuisine in January 2011. Here he shares his favorite places to dine when he's not putting the bam in dishes at Delmonico.

Where do you enjoy eating when you're not working?
I love going to Lotus of Siam, Hugo's Cellar downtown and Raku in Chinatown.

What dishes are most memorable?
I love taking my family to Lotus of Siam. My kids love the pad Thai noodles. My favorite is the Nam Kao Tod. It's like this crispy rice salad with ham and chilis. Lotus has tons of selections and all are cooked with fresh ingredients to order. The beef jerkey is awesome.

Hugo's Cellar downtown is old school Vegas in the Four Queens. Kind of a hidden jewel. Great bang for the buck. Great service from the bar staff. Great Manhattan! They do this salad cart where they build your salad tableside with like a dozen different ingredients to build this custom salad starter for you. Great ambiance! I go with my dad for a guy's night out and also with my wife for a nice romantic dinner.

Raku is a small kind of dark Japanese spot just off the Strip in Chinatown. I like all of the small plates. It gives me a chance to taste lots of food. They do a homemade tofu that you can get fried with this mushroom broth that is spectacular ? crispy asparagus is awesome and bacon wrapped tomatoes that they cook on this robata grill which gives this great smokey flavor. It's another spot that I like going with my wife for a late-night date night.
· All Coverage of Delmonico Steakhouse [~ELV~]
· All Dining Confidentials [~ELV~]