Share All sharing options for: Nothing Beats a Good Meal with Good Company for SushiSamba's Herb Wilson 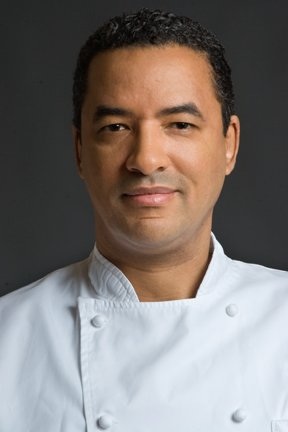 Herb Wilson won the Culinary Clash at the Venetian last month despite sciatica in his back that left him on crutches and may have ended his running career. The chef behind SushiSamba at the Shoppes at the Palazzo has been working in the restaurant industry since age 23 after graduating from the Culinary Institute of America before stints at Tavern on the Green and Larry Forgione's The River Cafe in New York City before heading to France to work at Gerard Pangaud and Les Frères Troisgros. He returned to New York to take over the kitchen at Le Refuge and later Bambou, Jack's Fifth and Bull Run Restaurant before becoming the executive chef at the Soho and Tribeca Grand Hotels. He landed at SushiSamba in September 2011. Here, he shares his favorite places to dine when he's not putting together Japanese, Brazilian and Peruvian fare at SushiSamba.

Where do you enjoy eating when you're not working?
In Las Vegas I love Jaleo, Blue Ribbon Sushi, Monta and, off the beaten path — Raku.

What dishes are most memorable?
I especially like Jaleo's version of seafood paella and their thinly sliced Iberico hams. At Blue Ribbon Sushi, they have a similar small plate/sharing concept to SushiSamba, so I'm always intrigued by what's on their menu. I especially love the lobster fried rice and their version of rock shrimp tempura.

Why do you enjoy going there?
There's a great reciprocity among local chefs. We always try to send out interesting new specials when we know a fellow chef is in the house. This makes the experience more personal and memorable. Raku is open late night for an after work bite and Monta is a great spot for ramen on my day off. I often bump into industry friends at these places. Nothing beats a good meal in good company.
· All Coverage of SushiSamba [~ELV~]
· All Dining Confidentials [~ELV~]