Move over East Fremont, downtown's biggest culinary story is now a block away at the former John E. Carson Hotel on Sixth Street. As first hinted by Eater Vegas, celebrity chef Kerry Simon is bringing a new restaurant and bar to Suite 100 of the Carson. And joining him will be a very familiar pioneer in the district's recent revival. 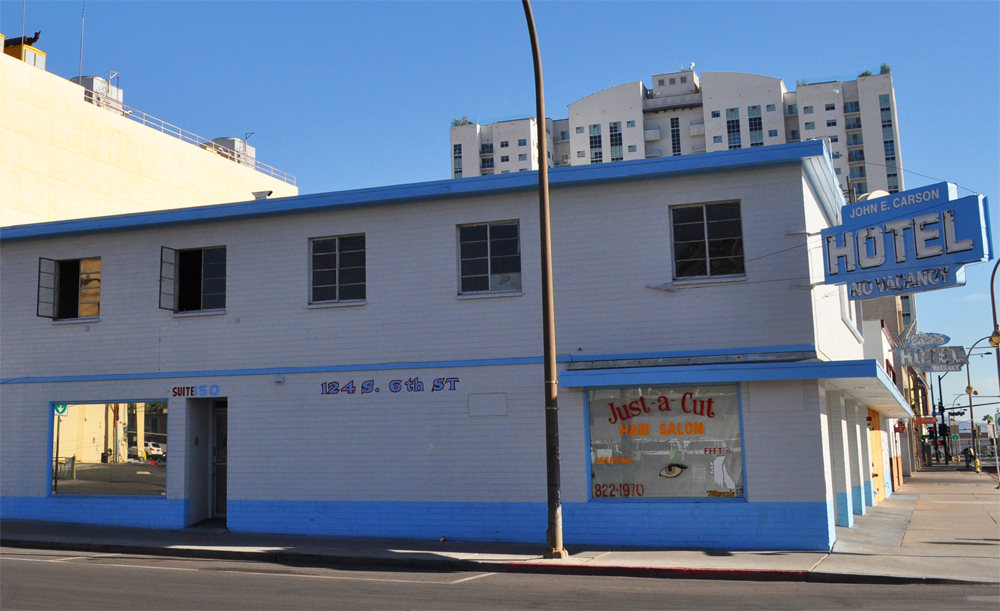 With the working title of Kerry Simon's Restaurant, the space will be built over two floors, pushing up into former office spaces and then breaking on through to the roof to add a patio deck bar and dining area.

Design work on the rundown, 59-year-old hotel will be overseen by Craig Sean Palacios, who also designed chef Natalie Young's Eat, located within line of sight of his new project. Palacios' Bunnyfish Studio team is currently working on Tony Hsieh's Inspire Theater at the top of East Fremont.

Joining Kerry Simon will be Le Thai boss Dan Coughlin, opening his second restaurant, Bocho, in Suite 150, around the corner and less than 500 feet from Le Thai's front door. Whether by design or accident, the name could be derived from the Spanish for brainy, or clever.

Bocho will also feature a bar and the current building layout offers an entrance on Carson Street.

Built in 1955, The U-shaped John E. Carson Hotel most recently provided cheap, low-income housing. The original retro frontage has remained intact and will be kept that way under the Downtown Project's ownership. The real estate titans, led by Zappos CEO Tony Heish, bought the hotel for $2,060,514 in April 2012.

It was always the new owners' intention to add food, retail and office space to their investment. Hotel rooms are currently being converted into re-purposed businesses. Other tenants already identified by Eater Vegas include O Face Donuts, tech firm Digital Royalty and Interactive Organics. Ground floor resident Black Spade Tattoo has maintained operations during these changes and is expected to remain on site throughout the transformation.

Kerry Simon, the man behind Simon Restaurant & Lounge at the Palms and KGB: Kerry's Gourmet Burgers at Harrah's Las Vegas, will be participating in downtown's Life Is Beautiful two-day arts, food and music festival later this month. He is also offering guidance on the menu for Pork 'n Beans, soon to pop up in the Container Park on East Fremont.

Le Thai opened in November 2011, jump-starting the current influx of media attention and curious diners to this area. Le Thai co-owner Puoy Premsrirut is attempting to place an oyster bar called Le Station in the downtown area, to be helmed by Los Angeles chef Ludo Lefebvre.
· All Coverage of Kerry Simon [~ELV~]
· All Coverage of John E. Carson Hotel [~ELV~]