In a lengthy, terse and often bizarre hearing, the Las Vegas City Council denied Kelly Murphy, creator of Drink & Drag Lounge and the state-shuttered Krave Massive, two liquor licenses. The move and revelations shared in the publicly broadcast meeting effectively ends Murphy's nightclub career in Las Vegas and any chance of him receiving further city investment funding. It also opened the door for the state of Nevada and local creditors to chase down the debt-plagued businessman for months, if not years, to come.

Krave Massive was shut down in September following a cease-and-desist order for non-payment of state sales taxes.

The background information received by the city council for the hearing was so lengthy and damning that it led Councilman Ricki Barlow to declare, ""I want nothing to do with anything Mr. Murphy has his hands attached to."

Drink & Drag is, as of now, operating without a valid liquor license and could at the discretion of the city be shut down as early as tonight.

The two unconventional hearings were filled with regret and sadness expressed by council members and Mayor Carolyn Goodman for letting the illegally run business be partially funded with city money and allowing themselves to be misled on a multimillion dollar project that was endlessly hyped by the mayor and now languishes as a partially finished construction site. 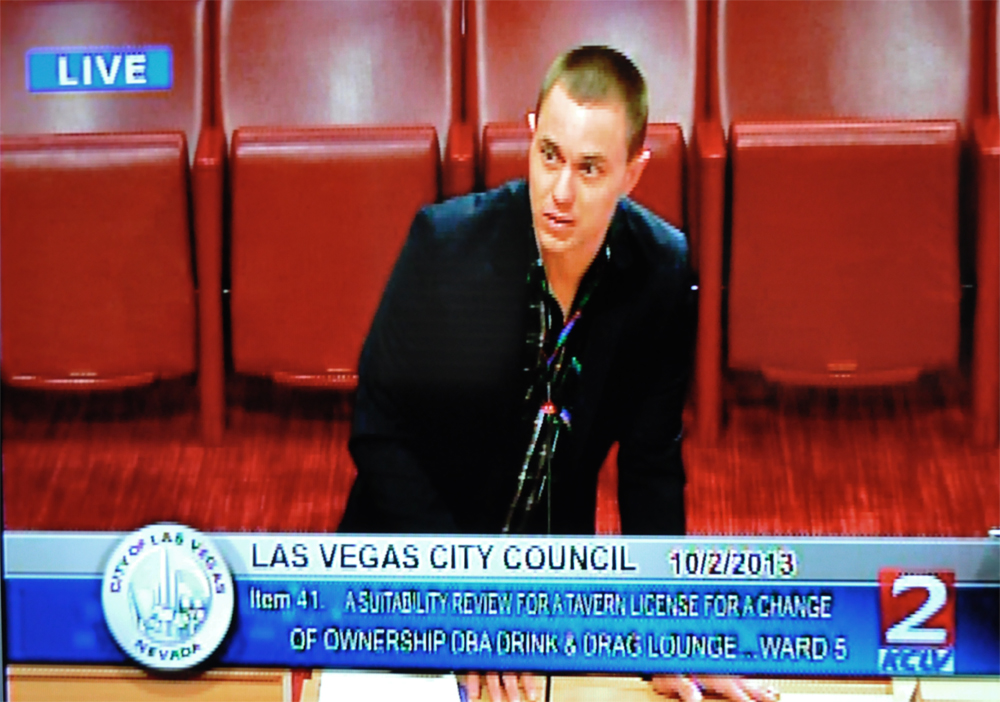 Today's hearings were to formalize the temporary liquor license granted to Drink & Drag, the drag queen filled bowling bar and nightclub, and the dramatically closed Krave Massive nightclub. Since Murphy chose not to attend the hearing, the event was immediately thrown into confusion.

Then, unannounced, a man calling himself Matthew Greppen stepped up to the podium. He claimed he had bought Drink & Drag one day before this hearing. He could produce no proof and had not yet handed over a penny, but turned up at City Hall hoping to transfer the liquor license right there on the spot. His aim was to keep the club open and support the "53" employees he says work for the "profitable" company. No background check or payment of license fees had been filed by Greppen. He said his purchase deal is to pay Murphy $600,000 and an additional $500,000 payable over three years.

Greppen is better known by Krave staff and the club attendees as long-time Murphy employee Tyler Caiden, despite his claim to the City Council he had never had any business dealings with Murphy in the past. The city immediately denied the transfer, cast doubt on Greppen/Caiden's story and left Drink & Drag without a valid liquor license.

As the hearing moved to consider Krave Massive's separate liquor license, yet another unannounced speaker stepped up — Sia Amiri, longtime business associate of Murphy. Amiri claimed to have bought the Krave Massive liquor license from Murphy also on the previous day before this hearing. His plan is to sell it off to help alleviate Murphy's debt to his company 99View LLC. Amiri claims the debt owed to him is $850,000. He had turned up at the hearing hoping to grant the transfer, demonstrating another startling lack of understanding of bureaucratic and local government procedure.

Like Greppen/Caiden, he could not produce any valid paperwork and the transfer was denied. Both Greppen/Caiden and Amiri were encouraged to start again from scratch, but comments from the council suggest they might be in for a more thorough background check than had been given for Kelly Murphy's application. Amiri was also told he needed to join Nevada and "stand in line to get our money."

Krave Massive endlessly touted itself as the "largest gay nightclub in the world," despite never fully opening. The rumors of Murphy's habitual shady business practices are long whispered, yet seldom on the record. But confirmed accounts of bankruptcy and incarceration should have been enough for the city to have looked twice at his proposal. Mayor Goodman was perhaps the loudest vocal supporter of Murphy. At the hearing, the mayor expressed words of regret to the staff effected by Murphy's actions and that Las Vegas could no longer claim to such a large beacon to diversity.

The city council also expressed a strong willingness to meet with Murphy to discuss his debts to the city. Murphy owes $29,000 in sewer fees, $1,800 in liquor fees and
$700,000 of taxes owed to the state. A demonstrably upset Councilman Barlow noted Murphy, "didn't have a problem running up to my office when he was opening up," but chose to not turn up when he owed the city money.

In the meantime, Drink & Drag is in legal limbo and Nevada will begin proceedings to recoup unreported and unpaid taxes. An investigation into sales and employee taxes will be forthcoming.

Otherwise unreported by an acquiescent local media, Kelly Murphy served jail time in 1984 for bank fraud in San Antonio after being caught using his 7-year-old son's Social Security number to obtain three bank loans totaling $73,500. He was released from jail in December 1995. His current Facebook status glosses over any issues with Krave or creditors, but still promotes Drink & Drag and his own personal move to the Strip's residences at Mandarin Oriental.

The meeting also made no mention of Zappos CEO Tony Hsieh and his Downtown Project, who were reported to be "entering negotiations to take over operations" of Krave Massive.