Share All sharing options for: Scott Conant on His Chopped Persona, Fave Restaurants 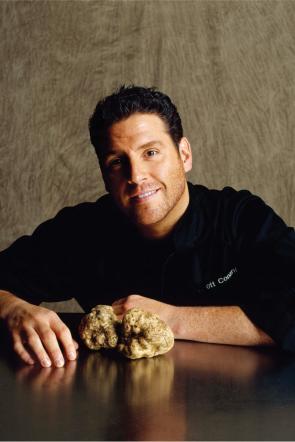 Chopped judge and Scarpetta chef Scott Conant heads to the Cosmopolitan of Las Vegas tomorrow night to sign copies of his new cookbook The Scarpetta Cookbook. Head over from 5 to 6:30 p.m. to Queue Bar, where he'll be meeting fans and signing, or go to the fundraising event at Scarpetta from 6:30 to 8:30 p.m., where for $150 (tickets here) you can try some of the dishes from the book.

Conant talked to the Las Vegas Sun about his reputation on Chopped. Fans tell him, "You're so nice in person. I thought you would be mean like on TV." Says Conant: "I tell them it's just a small snapshot of who I am. I am much nicer."

When compared to Gordon Ramsay and his reputation as a shouty chef, Conant says, "Uh, you know what? I blame it all on the edit! And Gordon is a great guy."

Also of interest, his favorite places to dine in Las Vegas, including China Poblano, José Andrés' Mexican-Chinese collab at the Cosmopolitan, Wolfgang Puck's Cut at the Palazzo, Jean-George Vongerichten's Prime at the Bellagio, the tiny sushi joint Kabuto and the brand new Sweets Raku, both in Chinatown. On his list to try: "The last time I was in town, Nobu at Caesars Palace wasn't open yet or had just opened, so I'm looking forward to going there. I'm really impressed with Caesars' food program in the last couple of years. I want to check out Michael Mina's new pub [Pub 1842 in MGM Grand]. I'm a fan."
· Q&A: Chef Scott Conant Says He's Not as Mean as He Appears on Chopped [LVS]
· All Coverage of Scott Conant [~ELV~]
[Photo: Scott Conant]