21 Ways to Eat and Drink Your Way Through Halloween

Share All sharing options for: 21 Ways to Eat and Drink Your Way Through Halloween

Halloween in Las Vegas blends Mardi Gras, New Year's Eve and a city-wide costume ball. It makes sense Sin City likes to start the festivities early and Day of the Dead lets the party stay late. Here are 21 ways to eat and drink your way through Halloween, from altar offerings to Zombie bull riding.

1. Hussong's Cantina & Taqueria
Where: Mandalay Place, 3930 Las Vegas Blvd. S.
What: Extend your Halloween with a Nov. 1 Day of the Dead celebration. Direct from Tecate, Mexico, sample Day of the Dead beers for $6. Or try the Caliente Michelada cocktail featuring spicy Chili Devil beer for $10. Skull-inspired face painting will be available from 6 to 8 p.m. with a live soundtrack from their resident Mariachi band.
Phone: 702-632-6450

2. Bouchon Bakery
Where: Venetian, 3355 Las Vegas Blvd. S.
What: A veritable pumpkin-palooza at Bouchon Bakery will stretch from Halloween through Thanksgiving. Executive pastry chef Sebastien Rouxel has created a pumpkin muffin with a cream cheese frosting center and orange fondant decoration. His pumpkin shortbread is topped with orange sugar and the pumpkin spice macaroons are filled with a pumpkin cream cheese frosting. His distinctive Bouchon spin on the traditional pumpkin pie is $28, or two for $50.
Phone: 702-414-6203

3. Panevino Ristorante
Where: 246 Via Antonio Ave.
What: "Enjoy the buzz while it lasts," says Panevino Ristorante, as they prepare "drinks to die for" with a dark sense of humor. Their $12 special concoctions include the "Sui-Cider" made from Jim Beam Hardcore cider whiskey, Tuaca Cinnaster and "Arsenic soaked" apples. Also on offer, the "Needle in the Candy," "The Lethal Injection," "Venom" and the "Allergic Reaction" built from "Killer Bee Honey Bourbon, Jim Beam Black, Yellow Chartreuse, Pesticide-infused Lemonade."
Phone: 702-222-2400

4. Culinary Dropout
Where: Hard Rock Hotel, 4455 Paradise Road
What: On Halloween night, the gastropub hosts a Greaser Guys and Pinup Gals themed evening, so dress accordingly. And for one night only, the "Pirates of the Black Sea" cocktail a combination of "Kraken Black Rum, Brandy, Grand Marnier, caramelized pineapple and lime."
Phone: 702-522-8100

5. The Cupcakery
Where: Monte Carlo, 3770 Las Vegas Blvd. S.
What: Be the toast of your block when you hand out Halloween-themed cupcakes this year. A dozen special assorted are available for $50, hand decorated with candy, ghosts, goblins and more scary sweetness. Bonus: Kids and adults who turn up to one of their three locations in costume receive a free pumpkin cupcake.
Phone: 702-730-7777

6. Cantina Laredo
Where: Tivoli Village, 430 S. Rampart Blvd.
What: Cantina Laredo celebrates with a Ghost Flower Margarita for $5, all day. Made with "1800 Silver Tequila, house made hibiscus syrup and Cointreau Orange Liqueur," a ghostly floating flower adds to the mood.
Phone: 702-202-4511

7. PBR Rock Bar & Grill
Where: Miracle Mile Shops, 3663 Las Vegas Blvd. S.
What: The Haunted Hoe-down celebration centers around a costume bull riding competition starting at 8 p.m. A late-night costume contest inside Rock Bar is on hand for those too terrified to take the ride. Build up some courage with their $5 Jack-o'-lantern shots, mixing Jack Daniel's Tennessee Whiskey and Fireball Cinnamon Whisky.
Phone: 702-750-1685

8. Rockhouse
Where: Grand Canal Shoppes, 3355 Las Vegas Blvd. S.
What: You don't have to wait for the sun to go down at Rockhouse to enjoy $5 drink specials. All day, they'll be serving Pinnacle Pumpkin Pie Vodka cocktails all day, including the "Pumpkin Patch," the "Irish-American Pie," "Halloween Cider" and the "Halloween Brew." Or stick with the devil you know and sample Jack-o'-lantern shots or Blue Moon Harvest Pumpkin Ale.
Phone: 702-731-9683 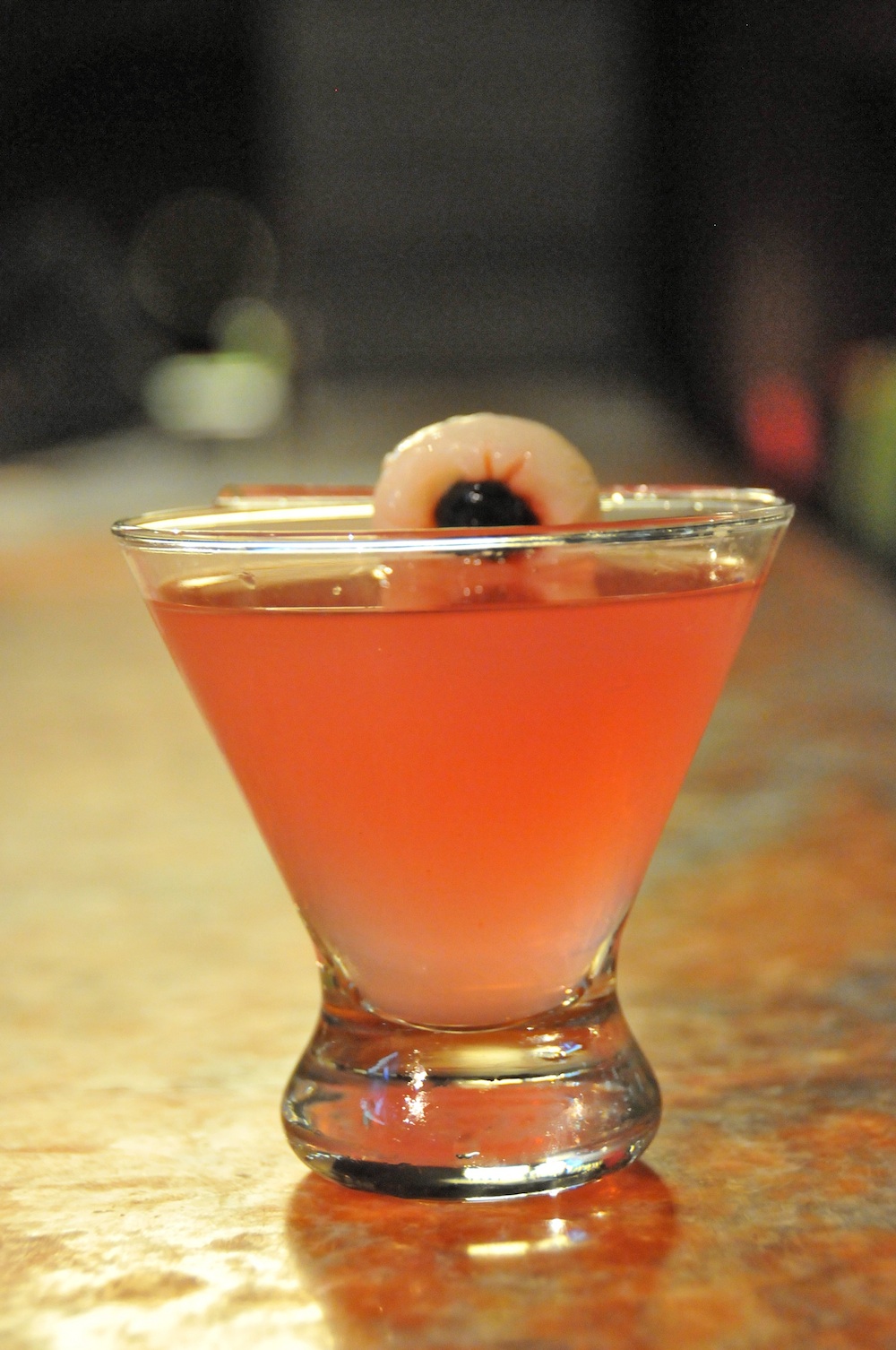 10. Wicked Vicky Tavern
Where: Riviera, 2901 Las Vegas Blvd. S.
What: The Wicked Vicky Tavern recently replaced the Queen Victoria Pub at Riviera and hosts its first "Wickedest" Costume Party and contest at 10 p.m. Prizes include free beer for a year at the tavern. They are also whipping up a "Ghoulish" drink special menu for the night.
Phone: 702-794-9260

11. China Poblano
Where: Cosmopolitan of Las Vegas, 3708 Las Vegas Blvd. S.
What: Altars will be set up on Halloween, covered with offerings to the dead as China Poblano authentically celebrates the Day of the Dead. Through Nov. 2, head chef Eric Suniga has created a special menu for the occasion. Pair them with three new cocktails, South of the Border Corps Reviver, The Catrina's Dance and El Último Trago.
Phone: 702-698-7900

12. Ghostbar
Where: Palms, 4321 E. Flamingo Road
What: Ghostbar embraces the undead with a contest for bold and fearless. The "Zombie Prom" Halloween Costume Contest is perfect for couples brave enough to enter as "Best Zombie." They have a shot at winning the first place prize of $7,500, or $2,500 for second place.
Phone: 702-942-7777

13. Rx Boiler Room
Where: The Shoppes at Mandalay Place, 3930 Las Vegas Blvd S.
What: Dress like you belong starting at 5 p.m when Rx Boiler Room encourages you wear your finest steampunk refinery or Halloween costume. In the steampunk lounge and bar they'll feature a selection of $3 shots, $5 beer and cocktails, including a Witches Brew, alongside a series of $10 special plates including a Cauldron Stew, Pumpkin Bisque and Pumpkin Mousse. Best costume can win you a dinner for two, hotel stay or show tickets.
Phone: 702-698-7900

14. The Eiffel Tower Experience
Where: Paris Las Vegas, 3655 Las Vegas Blvd. S.
What: The Eiffel Tower Experience at Paris Las Vegas turns into a tower of terror with zombie ambassadors, spooky decorations and "unexpected surprises." Their Halloween package includes a ticket to some of the best views in the city, a beverage and a photograph and runs through Sunday.
Phone: 1-877-603-4386

16. Hard Rock Hotel
Where: 4455 Paradise Rd
What: Across the resort, Hard Rock is scaring up a limited run of seasonal additions to their menus. Among the new treats, Mr. Lucky's leads off with pumpkin waffles topped with cinnamon whipped cream. Fuel Café has created the "Mummy May I" caramel latte with a Butterfinger topping. Fu has concocted the Delightfully Devilish Volcanic Sangria, so large its designed for four and Pink Taco's Day of the Dead margarita, with Patron XO coffee-infused tequila, Grand Marnier and espresso joins their medley of new dishes.
Phone: 702-693-5000

17. Jean Philippe Pâtisserie
Where: Bellagio, 3600 Las Vegas Blvd. S.
What: It's hard to miss the weeks of effort Jean Philippe Pâtisserie have dedicated into celebrating Halloween. A life-size witch sculpture looms over the counter, built from 250 pounds of chocolate and rolling fondant. Other sweet sculptures include a raven perched on a tree branch, a skeleton in an electric chair and a haunted tree filled with skulls. Visitors can take home their own chocolate skulls, ghosts, black cats, pumpkins and witches from both the Bellagio and Aria locations.
Phone: 702-693-8788

18. Rice & Company
Where: Luxor, 3900 Las Vegas Blvd S
What: You might not immediately think of sushi at Halloween, but Rice & Company have entered into the spirit with The Wicked Roll of the West, made with spicy tuna, yellowtail, cucumber and avocado, topped with spicy mayo. Pair it with a spooktacular Demon Slayer sake. The sushi and sake combo is priced at $30.
Phone: 702-262-4774

19. Cabo Wabo Cantina
Where: Miracle Mile Shops, 3663 Las Vegas Blvd. S.
What: It's "CABOWEEN" overlooking the Strip, with drink specials starting at 6 p.m. on Halloween through Saturday, Nov. 2. For guests in costume, there will be prizes including dinner for two at the restaurant and a grand prize awarded to the best Sammy Hagar costume. Bartenders and hostesses will have their faces painted in a sugar skull-style.
Phone: 702-385-2226

21. T&T Tacos & Tequila
Where: Luxor, 3900 Las Vegas Blvd. S.
What: Tacos & Tequila wins points for their spooky $12 Eye Candy Cocktail created with Grey Goose Le Citron and a clever "bloody eyeball" made from lychee, blueberry and raspberry puree. Also on hand, Ghost Pepper salsa or wings. The restaurant hosts a DJ from 8 to 11 p.m. Nov. 1-2, Dia de los Muertos margaritas are two-for-one, one for the guest and one in celebration of a friend or family member lost.
Phone: 702-262-5225
Eye Candy Cocktail [Photo: Tacos & Tequila]