Share All sharing options for: Design Changes for Pizza Rock & the Downtown Grand 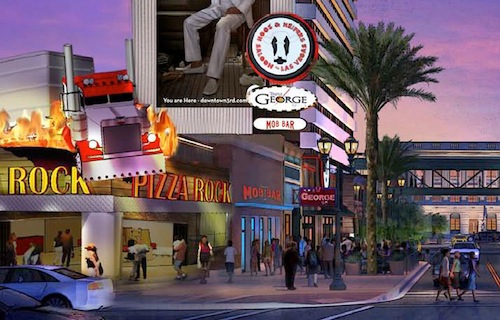 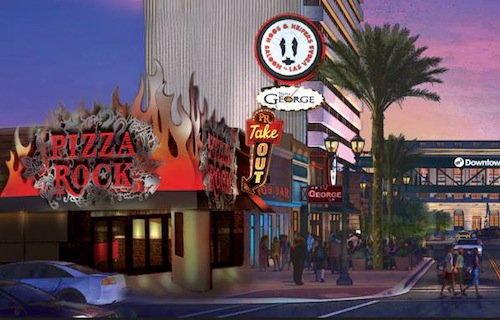 The eagerly anticipated total transformation of the former Lady Luck Hotel and Casino into Downtown Grand resort will be officially unveiled at a ribbon cutting ceremony on November 12. And all signs point to the equally anticipated Pizza Rock opening soon, across the street from the new casino entrance and under the stewardship of 11-time World Pizza Champion Tony Gemignani.

Since both concepts have been announced, a couple of changes have taken place. Most dramatically, Eater Vegas has confirmed the original dream design of a flaming, roof-mounted, six-wheel Peterbilt truck has sadly been abandoned. Pizza Rock's original Sacramento location features a DJ booth housed inside a similar truck. The current dramatic roof sign is already in place.

At the Downtown Grand, it's a case of re-writing their fictional back story for the resort. One year ago the building's design concept was "a former neon factory built in 1953." Then, updated renderings for the project added a 1937 inception date for the factory building. Weeks from opening night, someone must have not told the painters, as the final creation date is now displayed as 1935.

It is possible the design team were hunting for a relevant Las Vegas tie-in date, or Eater Vegas can at least gift them one. The completed Hoover Dam was dedicated on Sept. 30, 1935, by President Franklin D. Roosevelt, a 78 year anniversary to be missed by the casino's delayed debut.
· All Coverage of Pizza Rock [~ELV~]
· All Coverage of Downtown Grand [~ELV~]