Share All sharing options for: Exclusive: Yusho & Matthias Merges to the Monte Carlo

The mystery of the new Asian inspired tenant coming to the Monte Carlo is solved. Award-winning Chicago chef Matthias Merges is readying for his yakitori-inspired Yusho to become tenant C, adjacent to the forthcoming 800 Degrees Neapolitan Pizzeria and the Double Barrel Roadhouse.

Chef Merges has trail-blazed a second act career in Chicago running Billy Sunday, the original Yusho, the soon to open A10 and a second Yusho coming to the Hyde Park section of the city. He spent 14 years at Charlie Trotter's in Chicago during a period when the property was awarded the 2000 Outstanding Restaurant award from the James Beard Foundation. Merges rose to the positions of executive chef and director of operations before his amicable 2010 departure.

Yusho's under construction, curved frontage home is part of the massive remodeling of the Strip-facing section of the Monte Carlo that will completely transform the mock European frontage into an urban plaza. Marked only as a "Noodle Bar" on early renderings, the 4,170-square-foot Yusho space has already notched up a publicly announced $3,996,684 construction valuation. The space affords them a bigger footprint than their pizzeria neighbor or the forthcoming Sambalatte coffee shop to be located on the opposite entrance

Yusho will feature two dining rooms and an outdoor patio area cooled by fabric umbrellas with a combined potential occupancy of 176. Design accents from Merge's architect wife Rachel Crowl will include cedar wall finishes and timbers, exposed wood beams and planks on the ceiling and painted wood decor. Elements familiar to visitors to the original Yusho in Chicago. The Yusho menu is an artful interpretation of authentic street food with seasonal ingredients priced affordably. Despite Merge's extensive pedigree in fine dining, the concept's motto is "no glamour required." 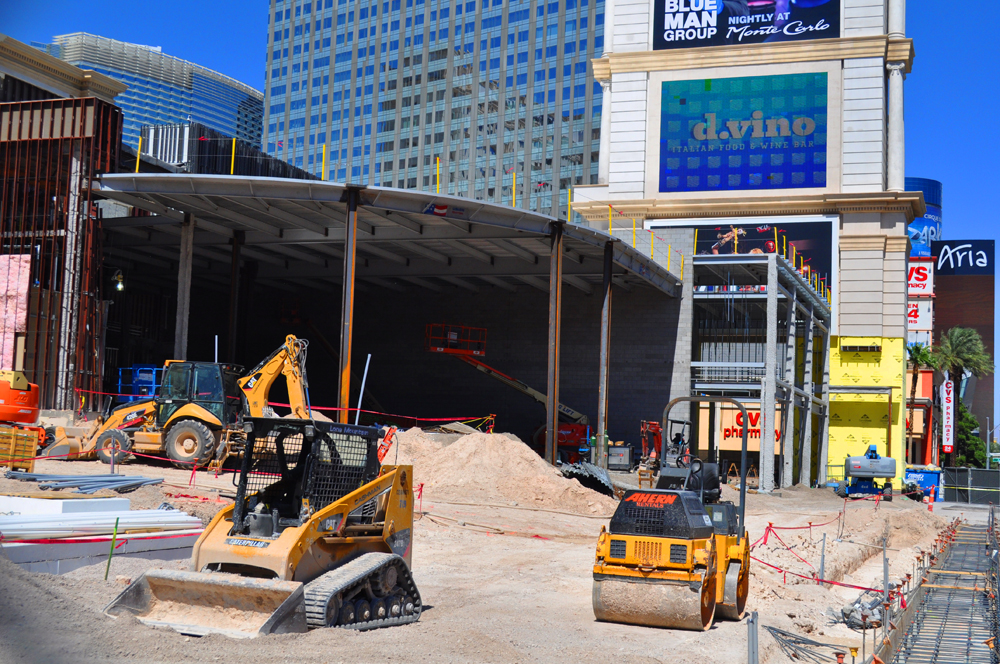 No stranger to Las Vegas, Merges was familiar with the shuttered Michelin-starred Restaurant Charlie from Charlie Trotter at the Palazzo. As first revealed by Eater Vegas, the space is being turned into an Pan-Asian food court, Shi Fang Market scheduled to debut in April 2014. The Monte Carlo is hoping Yusho will be completed during the first quarter of 2014.
· All Coverage of Monte Carlo [~ELV~]