Venue of Vegas Finally Heading Downtown, This Time For Real

Share All sharing options for: Venue of Vegas Finally Heading Downtown, This Time For Real

Six years in the making, the multi-function Venue of Vegas says it really, finally, is ready to build their 43,000-square-foot event space and they plan to be open by the end of 2014. A sequel to a very similar and successful concept in Scottsdale, Ariz., also called The Venue, the Fremont Street building will aim to be yet another draw for concert goers, pizza buyers and billiard players.

Anaheim, Calif.-based developer Valley of the Sun Las Vegas bought the plot of land at the corner of Fremont and Eighth Street in 2007 for $3.9 million. They demolished the building on the site, created an empty lot and ever since have been doggedly committed to creating the banquet hall space that can double as a nightclub. Like Scottsdale, they intend to include bonus attractions of a comedy room, pizza lounge, various bars and a billiards room. 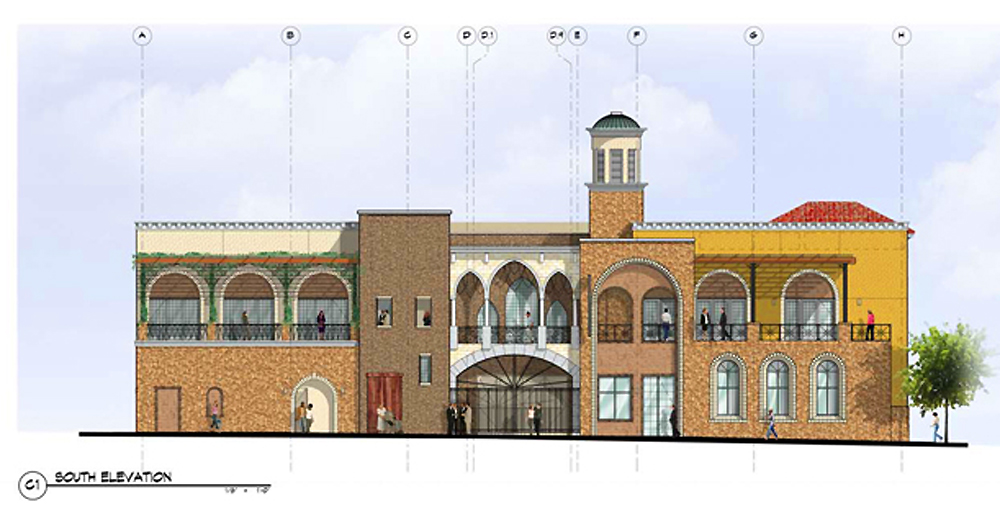 Victor Perillo and his company now say they have full financing and are ready to move forward. They have re-applied to the Las Vegas City Council for permission to restart the project. The current timetable is to submit plans in December, retain permits in January and open the doors in the last quarter of 2014.

New architectural designs keep many features that have been touted for six years and are still present in online renderings. Most prominently a decorative tower, complete with an aged copper dome will become provide a visual destination point. Guests entering the main lobby from Fremont Street will encounter an open space with a tile and marble floor. To the left of the entrance will be a permanent comedy room for live performances. To the right, a ground floor bar and pizza lounge. The huge main dining and banquet room can be adapted for special events.

A wide curved stairwell leads to the second floor, with more bars, banquet rooms, including a VIP section and a billiards room. The third floor has a roof bar with balcony access. The Venue's specialty is providing large catered events for charities, corporate events and weddings.

The new exterior design is full of wrought iron accents, columns and arched windows with signage for "The Venue" in large lettering. Both destinations can be described as New Orleans inspired and include much exposed stonework. There is also the possibility of including a retractable roof placed over the main concert area and banquet room.

In Scottsdale, Keep It Simple Stupid (K.I.S.S.) Back East Pizza and Beef Joint provided the pizza. It is currently closed for construction. In operation for more than 10 years, The Venue's concert events have included shows by Train, Sammy Hagar, Childish Gambino and Markus Schulz. The Comedy Spot also operates within the venue. No further details of tenants in Las Vegas have been released.
· All Coverage of Downtown [~ELV~]