A Look at What's To Come at Vince Neil's New Restaurant

Share All sharing options for: A Look at What's To Come at Vince Neil's New Restaurant

Mötley Crüe frontman Vince Neil sits in a booth with his girlfriend Rain Andreani to taste some of the new dishes at his coming restaurant, Vince Neil's Tatuado Eat Drink Party at Circus Circus. This particular dish, a chicken salad sandwich, comes from his travels with the band. It's the orange zest that hits the right note with Neil.

The partnership for this new restaurant came about when college friends David Tuttleman and Mark Weiss reconnected 30 years later to come up with Vince Neil's Tatuado Eat Drink Party, the eatery replacing Rock 'n Rita's at Circus Circus. Tuttleman, who already has Kahunaville at Treasure Island with partner Mark Green, and Weiss, a photographer who first shot Mötley Crüe in 1982 for their first national magazine spread, connected with Neil to help him bring his Tatuado brand to the Strip. Neil already has Vince Neil's Tatuado Restaurant & Cantina at LVH, more of a Mexican-themed restaurant. This place promises breakfast, lunch and dinner with burgers, sandwiches, jambalaya, quesadillas and more on the menu. 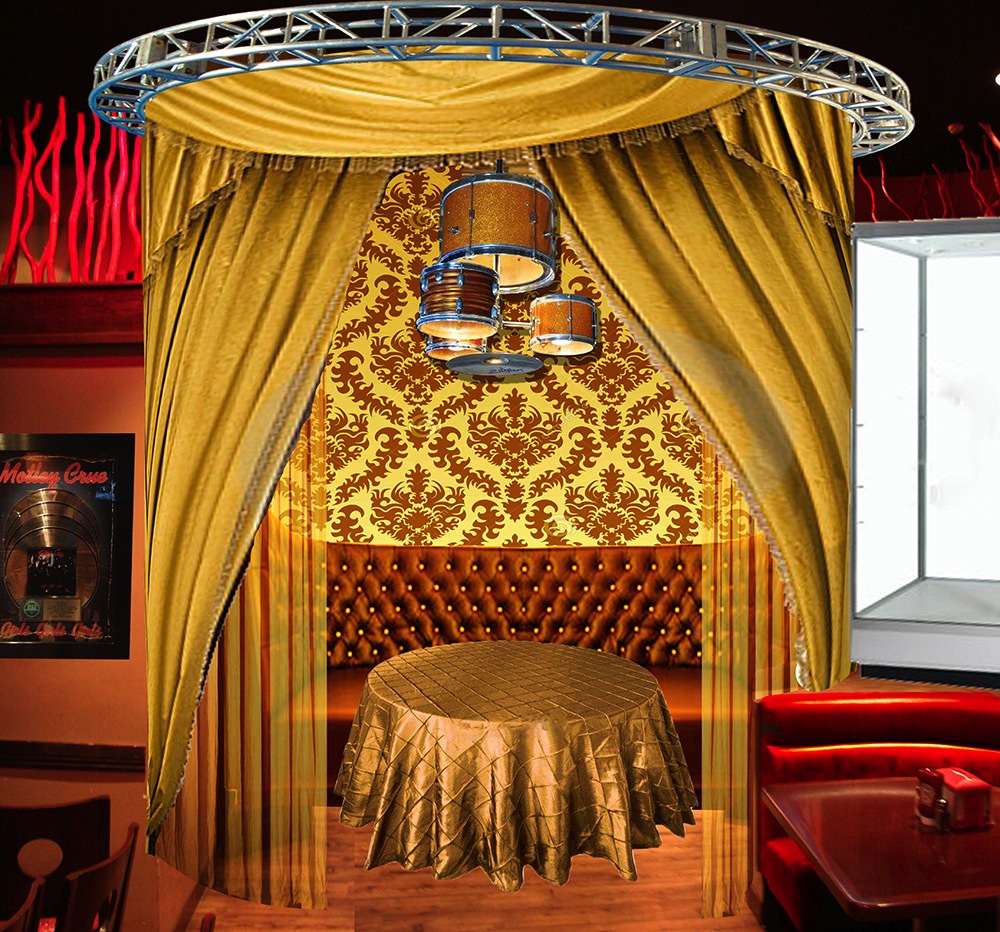 Rock 'n Rita's was in a state of revamping on Friday, with gold wallpaper going up in the back corner booth for the VIP seating, a stage being constructed and new deals being struck on the fly. Neil mentions that he would love to have a corner with memorabilia from good friends actor Nicolas Cage and comedian Carrot Top, and Tuttleman points to an area where that could happen. Weiss brings over copies of the menu with lanyards from his extensive backstage ventures at rock concerts for approval. Neil talks about bringing in his racing suits for display on mannequins and Tuttleman makes spur of the moment plans to buy a few.

All plans will be unveiled on Saturday in the 14,000-square-foot venue when it officially debuts. Vinyls from Crüe's first show on Sunset Boulevard with Yesterday and Today already adorn one wall while another of Neil on stage finds a home on another.

"I have wanted to expand the Tatuado brand and bring it to the Strip for a while," Neil says in a press release. "Teaming with David and Mark to recreate Rock & Rita's into my own spot will create a true home for the brand. People can come have a great time and enjoy my signature line of spirits while they party."

Photographer Mark Weiss sets the visual tone for the joint, meant to revive the bands days at the Rainbow on the Sunset Strip. Already gold and platinum records sit waiting for a space on the walls while two large video walls, projection screens and 22 HD flat screens thunder with music videos and the Tom Cruise flick All the Right Moves.

Outside the restaurant, the bus awaits a new wrap turning it into Vince Neil's Party Bus Bar. The flair bartenders there will remain as well as the party girls with their party shots.

Neil readies to head back to his house, and perhaps one of his four warehouses stocked with Mötley Crüe memorabilia and picks up a toilet bowl, one of the remaining souvenirs from Rock 'n Rita's. He offers to sign a couple dozen that can be sold.
· All Coverage of Vince Neil's Tatuado Eat Drink Party [~ELV~]